Trident Limited, the flagship company of USD 1 billion Trident Group, in its Board meeting appointed Abhishek Gupta as its Managing Director. Trident Limited, having world class manufacturing capacities in Textile & Paper and clientele spread over 75 countries, has emerged one of the largest exporters of terry towels from India.

Abhishek Gupta, 25, a Graduate from the University of Warwick and Schooling from the Doon, assumed the charge of Trident and has become one of the youngest Managing Directors. With average age of employees less than 29, Trident is known for providing fast track career opportunities and generates employment to more than 20,000 families.

Abhishek Gupta has been well groomed to take over the new responsibility. He led the company’s Commercial, Supply Chain, Project & Operations team and successfully introduced efficient systems and processes.

Prior to being appointed as the Managing Director, he was heading, the Corporate Marketing and Innovation Team and provided strategic direction to the marketing heads of all business verticals of Trident. He honed his skills in Marketing from Harvard Business School and has been able to successfully put into practice his academic knowledge, which has been instrumental in driving the marketing operations, generating strong revenue growth of the company.

Apart from sturdy academics and leadership skills, he believes in professionalism and his ability to inspire the members with the vision and values of the organization. 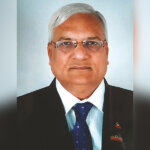 “Once a customer, always an Andritz customer”