After a Voith rebuild, APP’s BM 6 in Xiaogang, China, went back into operation at the beginning of 2012. The goal of the rebuild was to speed up the BM 6 to 1,100 m/min. At this speed range no other multi-ply board machine has ever produced top quality art board products, as now APP does in Xiaogang. APP and Voith have crossed the 4,000 tpd production mark and the production speed of 1,100 m/min. This is a new benchmark in the board making history.

The rebuild was a big challenge for the teams of APP and Voith because of the limited shutdown time of eight days. During this short period Voith has modified the wire, press and dryer sections to fulfill APP’s requirements. In the wire section the newly developed suction forming boards were installed to reduce stock jumping at such high speeds.

In the press section a new water doctor and save all pans were installed before and after the first shoe press nip. This modification is reducing the rewetting of the board at such high speeds.

The most complex rebuild activity was done in the dryer section. Voith has changed the concept of the existing steam and condensate system of the pre dryer section. In connection to this the Turbo Dryer S air caps were placed in the first two dryer groups. The goal behind installing the four gas heated Air Dryers was to increase the drying capacity of the pre dryer section. To ensure a stable web run at 1,100 m/min the open draw was rebuilt to become a closed web run system at the beginning of the 2nd dryer group.

In February this year APP and Voith started up the BM 6 again. After one day BM 6 was producing top quality board at 930 m/min. In April APP reached the world record mark of 1,103 m/min for a 24-hour period of uninterrupted production. 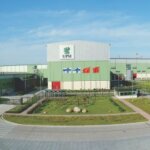 UPM will increase its presence in the attractive Asian paper segments