The move is in bid to expand its manufacturing capacity

The Telangana government has approached ITC to consider takeover of the ailing The Sirpur Paper Mills Limited located at Kagaznagar, according to Government sources.

“The state government has approached us for the revival of Sirpur Mills. We are looking into it,” the company’s Paper division CEO Sanjay Singh has been quoted as saying.

ITC and some more paper companies have been approached to consider the possible buyout to revive the company and save more than 3,000 employees and their families dependant on the paper mill.

ITC, which has been seeking to expand its manufacturing capacity with a new project adjacent the existing one at Bhadrachalam, is awaiting necessary clearances, particularly environmental, to take up the project. The project entails taking over some of the forest land. That being the case, ITC may find the acquisition attractive.

Sirpur Paper Mills is going through a corporate debt restructuring (CDR) programme led by IDBI Bank. The company had borrowings of INR 350 crore as of 30th September 2014. 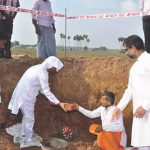 Khemka Containers to Set up a Rs. 100 Cr Unit in Sri City