The Rs. 50 Cr project is running from January 2017 and would produce W&P paper


February 4, 2017
Katyayini Paper Mills Pvt Ltd recently commissioned its new 150 TPD paper machine at Kuddiyawala village near Kashipur in Uttarakhand. The mill decided to add capacity in the form of new machine on account of good demand of its products in the market. The new machine is up and running since last week of January, 2017 with successful trial runs. Katyayini commissioned its first recycle paper based W&P unit in 2008 with a capacity of 120 TPD at the same location. With the new machine now, the combined capacity of the mill stands at 270 TPD of waste paper based W&P paper.

The new machine’s deckle size is 350 cm and is designed to run at a speed of 500-600 MPM. Among the major highlights of the machine are its hydraulic head box, wire part with dandy roll (of 1.8m diameter), bi-nip press followed by third press, drying cylinders of 1.8m diameter, etc. There is a hot calender from Gapcon and the machine is equipped with scanners and QCS (quality control system). A specific GLOBE Rewinder of 2000 MPM speed with power regeneration unit is another high-point of the new machine. Katyayini is also in the process of installing a film size press from Gapcon in the new machine.

The new machine would be producing type A W&P paper with Eco Mark in the range of 54-100 gsm and 80, 85, 90 percent brightness. The mill essentially uses waste paper, both indigenous and imported, so will the new machine. At Katyayini, there is a pulp section with de-inking system in place for producing required pulp from various kinds of waste paper. All the critical and non-critical components of the new machine have been sourced from India, Germany, and China. 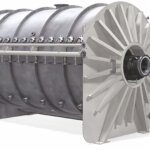 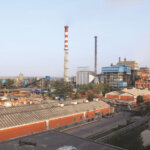