New 400,000 ton container board paper mill to be built in UK - Papermart
FacebookTwitterLinkedinYoutubeEmailWhatsapp

SAICA Group, a Spanish paper company, has announced plans to spend GBP 290 million ($471 million) to build a recycled paper mill in Trafford, United Kingdom. The mill is expected to create up to 200 jobs.

The company expects to break ground on the facility within the next several months. This recent announcement builds upon SAICA’s investment in the U.K, which has totalled more than GBP 470 million ($764 million) since 2007, when the company acquired International Paper’s Packaging business in the U.K. and Ireland.

The company said that when fully operational the plant will produce approximately 400,000 tons of recycled paper a year, which will be used to manufacture recycled corrugated boxes. The mill will have a sizable impact on the UK paper industry’s emnvironmental footprint, according to SAICA. It calculated that the increase in recycling capacity will reduce the 450,000 tons a year of used paper that is exported from the UK for recycling, while also cutting the amount of container board imported from the EU. 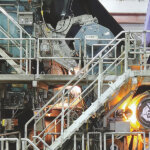