Retired yet still valuable paper production capacity can be given a new lease on life in a new location half way around the world. But imagine the complexity and potential risks of uprooting an entire coated paper making line built to North American electrical and piping standards and recommissioning it in China. It is an intimidating mission to be sure. First, the automation systems need to be updated to modern standards. Then, engineers must tackle the considerable job of refitting and reimplementing machinery pneumatics, hydraulics, lubrication and calender roll heating systems to make sure the automation systems and machinery work in concert. Despite the challenging nature of this assignment, Metso’s automation engineering and project team, with valuable help from Metso papermaking specialists, has successfully completed such a task with the startup of Shouguang Chenming Art Paper’s PM5 coated art paper production line, relocated from an idled Domtar mill near Vancouver, Canada. The mill is located in the city of Shouguang in China’s Shandong Province.

The capacity of the line since the relocation has been increased to 200,000 tonnes/year. The design speed of the 4.55 metre wire width machine is now 1,100 m/min compared to an 800 m/min operating speed in Canada. Chenming purchased new drives for the paper machine, the off-machine coater and the supercalender. The basis weight of the art paper produced on the PM5 lines ranges from 60 to 120 g/m2 (coated we i g h t ) . The end-use applications include inserts and covers for books & magazines.

The startup of the line was scheduled for mid-2008 and, to the credit of Metso’s and the customer’s project team, that’s exactly what happened. Mr. Yin Jianhua, Vice Factory Manager, reports the first reel of paper was produced only 10 hours after the paper machine startup was commenced on July 28, 2008. He credits the excellent commissioning to the professional efforts of Metso and Chenming engineers alike. After producing uncoated paper for a month, the off-machine coater and the supercalender started production on August 28.

The order for the automation project was based to a large extent on the longlasting and trusting relationship developed between the Chenming Group and Metso. That relationship started in 1997 when PM1 was commissioned. Most recently, Metso provided the quality control, process control and machine control system as well as the runnability and condition monitoring system for Shandong Chenming’s PM4, located nearby. The Metso-supplied PM4, with a capacity of 480,000 tpy, is the world’s largest newsprint line.

Mr. Bian Wanliang, Assistant General Manager, says.” We have known Metso for a long time, we know their capabilities very clearly, and we have worked well with them in previous projects.” He says that project management has been and remains a strong point for Metso.

Familiarity with Metso machine controls was also a positive factor. Mr. Yin says that process operators transferred from other Chenming machines already knew how to work with the Metso interlock logic and machinery control help functions. That familiarity would certainly help during the PM5 line startup. Moreover, properly interlocked machine controls are essential for safe operation.

The PM5 production line comprises a base paper machine originally supplied by Valmet, a re-reeler, jumbo reel transport carts, an off-machine coater, a supercalender, a single- drum winder, and a two-drum winder – all from different OEM suppliers. The automation scope of supply includes replacement of previous PLC-based machine controls for all the line’s stages except the winders. The machine controls and paper quality controls were consolidated in the metso DNA CR platform.

The automation project also included a complete set of electrical, pneumatic and hydraulic field devices with related engineering. Metso made an extensive pre-delivery study with old documents to define the required scope of supply. To ensure a good line startup, Metso included mechanical installation supervision and process startup support in the automation package and commissioning scope.

The re-commissioning of old, dismantled papermaking equipment is quite different and much more challenging than starting a brand new line which is precisely specified and made to order. With an old line there are a lot of unknown challenges and some risks to be managed. Mr. Yin says that combining automation, mechanical and process knowledge was a key ingredient for a good startup of the new line. He says that there is a very short, select list of companies in the world that can bring together the knowledge required for combining process and machine controls. Metso is one of them, he adds.

Faced with moving a complete line from another continent Mr. Bian says that Chenming needed a total solution. “The scope whole project had to be very carefully planned. We needed to know what to keep, what to replace, and what to renew,” he says. For instance, the change in motor voltages from 460 VAC, 60Hz in Canada to 380 VAC, 50Hz in China had to be addressed. The conversion from English to Metric units was another challenge.

The magnitude and complexity of the task ahead was brought into focus when the first site survey was made at the Domtar mill in early 2007. The agreement to purchase the mill equipment was concluded in November 2006. When engineers arrived, the paper machine had been disassembled and was laying in unconnected pieces like a large jig-saw puzzle. The off-machine coater and supercalender were still intact. After cataloguing, the machinery was shipped to Shouguang during 2007.

But a lot of work remained. Chenming engineers obtained original machinery drawings from Domtar and the OEM suppliers. Similarly, original machine control logic was acquired from the previous automation suppliers and machinery manufacturers. “It was a lot of detective work,” says Mr. Bian.

Despite the documentation of the machinery beforehand, good on-site engineering and innovation was essential for an on-time startup. The list of compatibility and interface issues was long. For instance, there were initial problems to control the off-machine coater’s stepping cylinders. After opening up and analyzing the mechanical construction the control strategy was designed to match. Hydraulic control units were rebuilt and new field components were installed. The calender roll heating system was reengineered as well.

All flexible hoses had to be checked for compatibility and fittings were changed to convert from English to Metric sizing. because of the difference in motor electrical standards Chenming purchased a special MCC system for motor controls. The list of compatibility issues goes on. Nevertheless, the process of on-site engineering was accomplished successfully through a lot of diligence, leg-work and good communications between Metso and Chenming engineers.

RISING TO THE TASK

When implementing machinery controls for this Chenming PM5 project and other projects Metso’s automation engineers have faced challenges which are quite different from normal papermaking process controls and quality controls. The proper and effective engineering of machine controls requires detailed knowledge of paper machinery. Faced with disassembled machine components and twenty-year-old drawings the required pneumatic, hydraulic and electrical field devices had to be engineered and selected properly and the machinery logic controls had to be figured out without a lot of ready-made documents from the customer.

In this respect, the Metso engineers rose to the task at hand. For instance, a flying splice is a very demanding task requiring the very precise timing which is available in metsoACN control I/O. With the aid of a data-logging simulator the required timing for the flying splice was defined with millisecond precision. The result on the machine was an almost instant success. On the second try the flying splice took hold.

With so many details to work out at the project site there were some risks involved. Jukka Hirvonen, Metso’s onsite automation project manager, explains how these risks were successfully managed: “In the beginning of the project the risks were realized, listed and analyzed. Also, all necessary plans and actions were made and the resources needed were reserved. All the machine information that the customer had collected was carried to Finland for basic engineering. We had regular project meetings with the customer where the open or unknown issues were discussed. Site surveys were an extremely important part of the project work, so all unclear issues were checked. This was really a lot of work and the key issue of the project realization,” he says.

After the PM5 line startup and previous Chenming machine startups Mr. Yin Jianhua sums up his experiences: “Based on our experiences Metso is very strong in process automation and on the mechanical side as well. We have confidence in their capabilities, “he says. 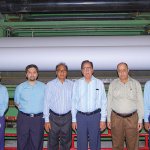