In a written statement, UPM said current discussions continue and a number of significant issues remain unresolved. According to the information obtained by Kauppalehti, UPM is the potential future owner of Myllykoski and its German alliance partner company Rhein Papier GmbH. 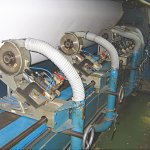