The life cycle assessment study is the first of its kind that compares the environmental profile of plastic-based trays against paper. The difference in climate impact is substantial, says Michael Sturges, who lead the study at RISE.

BillerudKorsnäs is offering an innovative paper, FibreForm®, to make laminates for trays used in food packaging. Now, a recent life cycle assessment performed by RISE, Research Institutes of Sweden, shows that a packaging tray made from FibreForm has up to 71 percent less global warming impact compared to trays made of only plastic.

The main reason for the lower global warming potential is that the FibreForm laminate requires less energy in production than plastic. In addition, the tray can be recycled as paper in most European countries, which reduces the end-of-life impact. The first tray made of FibreForm was released to the market about 10 years ago and further improved together with production partners.

Hein van den Reek, Business Director Solutions at BillerudKorsnäs states that the FibreForm was developed to challenge conventional packaging with the objective to reduce unnecessary plastic packaging. The 3D-formable material makes it strong and stable. BillerudKorsnäs believes that sustainable growth can be created by offering alternative packaging possibilities together with our partners.

The tray made of FibreForm is approved for food contact and can be found in retail stores as a packaging for cheese, meat, fish and similar food. The material can be formed in existing thermoforming lines and press-forming equipment on the market, meaning that food processors, brand owners and retailers can make an easy switch in their production.

The life cycle assessment performed by RISE compares FibreForm trays with conventional EPS trays and APET/PE laminated plastic trays. The study encompasses all stages of the product life cycle, from raw material production to landfill or recycling. At 20.0 kg CO2e per 1,000 trays consumed and disposed of, the FibreForm tray offers a 62 percent saving in global warming potential compared to the EPS tray and a 71 percent saving compared to the APET/PE tray. The work has been peer reviewed by Intertek, a global leader in the field of verification and assurance. 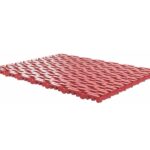