Two decades ago, the Woodland mill in Maine was a vibrant pulp and paper complex. Suffering the fate of many commodity pulp and fine paper mills, Woodland was near extinction in 2010 when a company with a vision bought the assets, injected USD 180 million (EUR 155 million), and changed the course to value-added tissue production.

St. Croix Tissue is among the newest producers of premium tissue parent rolls in North America. The machine hall is built next to an existing hardwood pulp mill (Woodland Pulp). Mirror-image ANDRITZ PrimeLine tissue machines, which started up in 2016, are quickly ramping up to a combined design production of 126,000 t/a.

“Without question, the addition of tissue making capabilities saved this pulp mill,” says Arvind K. Agarwal, CEO of International Grand Investment Corp. (IGIC), the parent company of Woodland Pulp, St. Croix Tissue, and Cascade Pacific Pulp mill in Halsey, Oregon. “Just prior to our buying Woodland in 2010, the owner (Domtar) put the mill into indefinite shutdown. The future of this facility as a producer of commodity pulp was simply not sustainable.”

The rebirth of the mill has special meaning to Marty Richard, Tissue Manager. Richard was raised in the local community and worked at the mill for 16 years. “We saw some tough times and it looked like the end was near,” Richard says. “In the late 1980s, there were 1,200 people working in the pulp, paper, and oriented strand board (OSB) plants around here. Before IGIC came in, there were about 320 people left in the pulp mill. To come full circle where we are investing and hiring – for a mill that has a bright future – is really rewarding to be part of.”

“When we acquired Woodland in 2010, we already had the idea to maximize our return by adding tissue making capacity,” says Agarwal. “My job was to turn this facility around by converting it from a commodity producer to a value-added facility.”

Agarwal and his team went to work immediately. “First thing,” Agarwal says, “was to reduce our dependence on oil by bringing natural gas to the mill. Local distribution companies said it would take several years to permit and build a pipeline. We did it in 10 months with an investment of USD 17 million. That was a positive indicator to the employees and community that we meant business.”

“There were also investments to improve the reliability and throughput of the kraft mill,” says Marco L’Italien, Vice President. These investments set the stage for the announcement in 2013 that a new tissue mill would be built.

According to Tom Dorsch, Project Leader for St. Croix, “We went through a very detailed process to develop the specs for this mill, and ANDRITZ was able to fulfill all the requirements of our spec.”

Of importance was a specification for a steel Yankee instead of cast iron, because of the heat transfer advantages and safety factors. St. Croix specified 18- foot diameter Yankees in stead of the standard 16-foot ones. “The larger Yankees were a good choice,” L’Italien says. “We don’t have nuisance breaks since we have eliminated the steambox and simplified the machine.”

Another consideration was machine width. “To meet the needs of one of our key customers,” Richard says, “we needed a machine that would give us roll widths from the standard 102 inches (2,591 mm) up to 112 inches (2,845 mm). Not too many tissue manufacturers have this capability on-machine.”

“We have come to appreciate ANDRITZ’s contribution not only for their up-front engineering, but also for their understanding of the entire process,” Agarwal says. “They have been an excellent partner the entire time – from the initial design to optimization of the mill. They have also kept in the forefront of technology, ahead of their competitors.”

The contract with ANDRITZ was signed in January 2014. Ground-breaking for the new mill occurred in October 2014. “We had one of Maine’s harshest winters,” Dorsch recalls. “At this time, we were doing the deep foundation work. There were challenges to be sure, but all of the suppliers, including ANDRITZ, stepped up to help us recover schedule.”

For the Baileyville area (population 1,500), this was a massive construction project. “Logistics was one of our biggest challenges given our remote location,” Dorsch says. “It is 35 miles to a deep water port, 90 miles to the closest airport, and highway access is by two-lane roads. We had over one million construction hours involving 525 people on-site at our peak in the middle of winter.”

On the equipment side, ANDRITZ delivered the first machine in May and the second one in August 2015. “We began commissioning TM1 in January 2016,” says John Schamell, ANDRITZ’s North American Vice President for tissue and drying. “Even though construction was proceeding around us, we checked out the machine section by section. It was a little hectic and the operators were brand new. But, we got stock on the wire in early March.”

The second machine was commissioned and started up with a more traditional approach and pace. “It started up well,” says Schamell, “even though we had fewer resources since TM1 was in full operation by then. We had a good start-up in July 2016.”

“In our first full month of operation with both machines, we reached 70% of saleable design capacity for this mill,” Dorsch says. “That’s a very fast ramp-up.”

When asked about the working relationship with ANDRITZ, Dorsch comments, “Whenever there were issues, ANDRITZ took ownership. Any problem got fixed and got fixed well. They were very open and transparent. They were always sensitive to timing, costs, and the impact on our operations. They are an excellent partner that way.”

About 85% of the machine components were manufactured at the ANDRITZ facility in Foshan, China. The Steel Yankees were fabricated in ANDRITZ’s state-of-the-art workshop in Hungary. Headbox, press rolls, and hydraulic systems came from Europe and the air systems came from Canada.

“Like many North Americans, I wondered what the quality of the components manufactured in China would be,” Richard says. “I went to the ANDRITZ workshop in Foshan to inspect the first machine. It was clear that quality was the first thing on the minds of the people – we didn’t even have to ask the question before management was explaining their QA/QC processes. It was impressive. After delivery, we could see that the workmanship was really excellent.”

“ANDRITZ committed a very good team to this project, and they integrated well with our group,” Dorsch says. “This is the third machine-pair start-up I have worked on and I can say that this project had more vendor support than I have typically seen. But, it was essential here given that our workforce was green with very little tissue experience.”

St. Croix partnered with the local community college to design a training program so potential job candidates could learn about tissue making. Completing the program did not guarantee a job, only gave the opportunity for an interview. “Then in August 2015, we hired the initial team of 58 employees,” Richard says. “The community college again partnered with us for a four-month training program. Much of this training was conducted by suppliers, including ANDRITZ.”

Part of the funding for this project comes through a New Market tax credit program. A requirement for that credit is that St. Croix hire 60% of its new employees from a low-income bracket and maintain that ratio for seven years. “This has a huge benefit for the community,” L’Italien says.

“Every converter, who has run our tissue, likes it,” L’Italien says. “One converter was able to raise speeds by 70% due to the runnability of our product.”

St. Croix considered investing in structured tissue, but decided to go with the CrescentFormer. “Even though our tissue is not structured, it is of very high quality,” Richard says. “In some cases, it has allowed us to get a foot in the door in traditional structured markets. The formation on the CrescentFormer is just so good that we can compete well in the softness for the higher end bath tissues.”

“Before we started up, I was concerned about physical quality of the reels, since we would be making 88-inch (2,235 mm) diameter rolls,” L’ltalien says. My concerns were unfounded. These machines make nice flat rolls with excellent profiles. Whatever ANDRITZ is doing with its reel building technology certainly is working.” 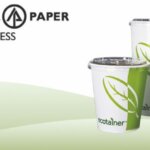