Holmen Paper said that it will shut down PM 61 — the smaller of two paper machines — at its mill in Madrid, Spain. PM 61 has a capacity of 170,000 tonnes per year and produces coated magazine paper (LWC), as well as improved newsprint to a lesser extent. In recent years, the machine has seen low capacity utilization.
Holmen acquired the mill in Madrid in 2000, by which time PM 61 had been operating for two years. In 2005 the mill expanded with the addition of PM 62, a new paper machine for large-scale production of newsprint. After PM 61’s closure, PM 62 will give the mill a capacity of 330,000 tonnes.
Holmen Paper operates three paper mills: Hallsta and Braviken in Sweden, and Madrid in Spain. The mills, combined, produce wood-containing uncoated and coated printing paper, mainly for daily newspapers, magazines, advertising matters and telephone directories. After the shutdown of PM 61, total production capacity of Holmen’s three mills will be 1.765 million tonnes per year. 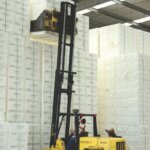