Finance Minister Arun Jaitley on May 30 inaugurated a new production line at Hoshangabad to manufacture currency paper, saying it symbolized the beginning of the ‘Make in India’ initiative and would ensure high-denomination notes are printed on locally-made paper.

Currently, currency notes of larger denominations are printed on imported paper though the ink used is mostly produced within the country, the Minister said. Jaitley made these comments after inaugurating the New Bank Note Paper Line with an annual capacity of 6,000 tonnes at the Security Paper Mill (SPM).

The Minister also expressed happiness that the Government’s flagship ‘Make in India’ programme was making a beginning in Madhya Pradesh, which had ceased to be a Bimaru (sick) state following various initiatives taken by Chief Minister Shivraj Singh Chauhan in the recent past.

The Madhya Pradesh government has done well to promote agriculture and infrastructure and it should now focus on industry, he said, while promising to consider the state’s demand for more initiatives to encourage manufacturing activity.

Hoshangabad was chosen as the centre for producing paper for printing currency notes several decades ago by Morarji Desai, who was the then Finance Minister and later became the Prime Minister.

However, it produced paper for printing of currency notes of smaller denominations only, Jaitley said.

With the development of new facilities at Hoshangabad and also Mysore, it would be possible to produce currency printing paper in adequate quantities to meet the needs of the nation. The Bank Note Paper Line facility at Mysore would have a capacity of 12,000 tonnes and was expected to be commissioned by the year-end.

A Finance Ministry statement read: “The combined savings of foreign exchange from these two Bank Note projects will be about Rs. 1,500 crore in the coming years.” This will also reduce the possibility of a diversion of the paper supplied by foreign countries to other destinations for the purpose of generating fake currency, the Ministry said.

Moreover, this move also reflects what Prime Minister Narendra Modi recently said addressing a conference on financial inclusion at the RBI’s 80th anniversary celebrations in Mumbai. He said that he wanted the Reserve Bank of India (RBI) to turn ‘Swadeshi’ by ensuring that the security paper and the ink used for printing currency notes are manufactured domestically.

“Can we not take a pledge that from a certain date onwards the paper and ink used to print our currency are both Indian?

“Does it look nice that the picture of the Father of the Nation, who fought for ‘swadeshi’ (self-sufficiency), should be printed on ‘videshi’ (foreign) paper?” Modi observed at a function to commemorate the completion of 80 years by the Reserve Bank of India.

According to Reserve Bank of India report, the various Security Presses in the country supplied 20.918 billion banknotes in FY2014 against 19.103 billion in the previous year. A senior RBI official said almost 80 per cent of the notes are printed on imported cotton-based paper.

“Are there no industrialists in India who can be told to put up a factory to produce currency-grade paper as well as ink? They can be given money (loans) to establish these facilities. They can source technology globally.

“Our currency (paper) and ink should be Hindustani. Make in India begins from here. I believe the RBI should consider this as its responsibility and take up leadership in this regard. We can do it,” said Modi.

Due to the sheer size of India’s population and the quantum of banknotes that are required to be put into circulation every year, the country has emerged as one of the world’s biggest consumers of the ingredients that go into production of banknotes, a top RBI official said in a speech last year.

The international banknote industry, comprising various manufacturers of machines, paper, ink and security features, is estimated to be worth around USD 28 billion. 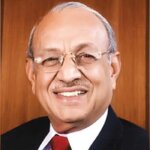