Sutton currently serves as president and chief operating officer responsible for leading and running the company’s global operations. Prior to his current role he was senior vice-president for industrial packaging.

Current CEO and Chairman John V. Faraci is retiring. Faraci has served as CEO and chairman of the board of directors since November 2003.

He led the transformation of International Paper that began in 2005, when the company included more than a dozen different businesses, from chemicals to real estate to forestry. IP sold its diverse assets and set a course to focus on its two core businesses, packaging and paper.

Further appointments at International Paper have also been announced, with Thomas G. Kadien named as senior vice-president responsible for human resources, communications and global government relations alongside his current responsibilities for supply chain and IP India. Currently, he is senior vice-president for consumer packaging in North America, with responsibilities for operations in India and China. Kadien has been with International Paper since 1978. 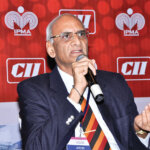