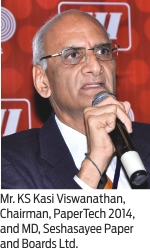 Paper Mart interviewed Mr. KS Kasi Viswanathan, Chairman, PaperTech 2014, and Managing Director, Seshasayee Paper and Boards Limited, on the sidelines of PaperTech 2014. This brief but interesting interaction focused on PaperTech 2014, the challenges pulp and paper industry currently faces and the future of the industry.

Here are some excerpts from this lively interaction.

PM: What are your comments on the theme “Making Paper Industry World Class”?

Kasi Viswanathan (KV): Over the last five years or so, the capacity of a majority of the large paper mills in the country has taken them closer to becoming world class mills. All these mills have a minimum annual capacity of around 100,000 to 150,000 tons – that’s the minimum capacity needed to bring new technologies/automation etc in pulping, recovery and paper machine. So, this is the right time for us to talk about moving towards becoming world class. We have our own constraints, but still we are moving towards becoming world class. When I compare with where we were around four to five years ago with where we are now, I find that we as an industry have certainly moved closer to some of the parameters of world-class paper mills.

PM: What special efforts CII and its members are making to make the Indian paper industry world class?

KV: We started in 2007 and this is the eighth PaperTech programme. As part of PaperTech, we have identified three specific areas in which we, as industry, can become world class, namely energy, water and environmental performance. All the three are extremely important areas for the industry. We formed a core group of good and efficient engineers and made them visit some of the key paper mills in the country to find out what good practices they had been following in these three areas. This group of expert engineers observed the way these mills worked. Initially, the mills were hesitant to divulge all data, as some of the members of this core group came from competitor paper companies. But I’m glad that after the group made a few visits, mills started requesting us to send the core group to their mills. In fact, when we sent the core group to a mill, just by re-adjusting the extraction of the MP steam and the LP steam, the mill could generate additionally about 1.0 MW of power from their TG.
Also, PaperTech gives paper mills an opportunity to share their knowledge and experiences with one another to solve technical problems that some of them may be facing. Since engineers meet face to face, when the head of a department has a technical problem he is able to call his counterpart in some other paper company and get help from him without hesitation. Many times, the response is “Do you want my engineer to come to your mill and help you or do you want to send your engineer to my mill to take a look at how we do here.” PaperTech is an excellent platform for engineers to meet and it helps operating personnel to speak freely to his counterpart at another mill for problem solving.

PM: Tell us about the subjects that would be covered during PaperTech 2014.

KV: Like I said, our thrust areas are energy, environment and water. This time, we have identified a very specific area of extended delignification. For example, if a mill consumes about 2 tons of steam for every ton of pulp that it produces in a conventional digestion system, it can reduce its steam consumption to 0.8 tons through extended delignification. That amounts to saving around 60 per cent of steam. Pulp mills today are saving huge amount of thermal energy with the help of this concept, and it is the thermal energy that we first need to save. So we thought of bringing those who are operating in an extended delignification system on a day-to-day basis so that they could share their knowledge and experience with others.
We will be focusing on four or five low-investment technologies that we have identified as part of PaperTech. Paper mills can use them to their advantage. There are sessions that will specifically focus on these technologies.

PM: Comment on the two main challenges that pulp and paper industry is currently facing – water and energy? How should mills go about facing these challenges?

KV: A small mill that operates with waste paper and makes unbleached Kraft paper as a final product is able to recycle water without much difficulty. The problem arises in medium-sized mills, which sometimes also make bleached paper using chemical pulp. We have sent people to some medium-sized mills in places like Vapi and UP to understand what they have been doing in this area and to help them in all possible ways. We also roped in paper associations in these places and made them participate in a Teleconference in Chennai last month. Our core group had a discussion with them, and we are now trying to send the core group to these mills so that they could help them in reducing their consumption of water and in improving their environmental performance. The response has been encouraging so far. The whole programme has been highly satisfying.
Energy is expensive. Perform, Achieve and Trade (PAT) scheme by Government of India is a great opportunity to focus on energy conservation. Renewable Energy Certification (REC) is yet another good scheme to become green. As part of PaperTech we have a separate session on PAT and REC.

PM: What do you expect to achieve through this conference?

KV: If all those who participate in this conference take at least one or two of the ideas presented at this conference to their mill and implement the same, we would be very happy. You see, the best practices given in the manual are not just ideas; they have been implemented; it’s not just theory. All the projects that figure in the manual are projects that have been implemented by paper mills. A lot of ideas will be shared at the conference. I’d be very happy if some of these ideas are implemented and manufacturing cost is reduced. This is what we want to achieve through this conference.

PM: Would you like to give a message to the Indian pulp and paper industry?

KV: First and foremost, the Indian pulp and paper industry should not look at electronic media as a threat, instead take it as an opportunity to rethink. There will always be demand for paper. A new kind of demand for paper is burgeoning like the copier and packaging grades. Import, particularly from ASEAN countries is a threat. So we have to be competitive. Large integrated mills in India like any other large mill worldwide depends on a renewable raw material, that is, wood; and as long as we keep planting more trees than we cut, availability of wood should improve and we need not go into a mad panic. I still recall, when we used to travel to Europe in late 70’s, there were serious discussions on paperless office. Strange as it may seem, after about 35 years, paper is still being used world over. But having said that, the Indian pulp and paper industry must assess the new market situation and adapt accordingly.
A lot can be done to propagate that paper is a noble product. It is green. It is sustainable. We need to focus on young school children to project the good image of the industry.
Today’s Indian paper industry needs young people. Now, this is a matter of concern and we need to motivate and attract young qualified people to join our industry.
To put it briefly, the time has come for us to start thinking differently!