Middle East’s annual consumption of paper will increase to 29 tons by 2020, from 18 million tons in 2010, according to Asia Pulp and Paper, the second largest paper manufacturer and supplier in the world with operations in more than 65 countries. This was revealed at the conclusion of Paper Arabia, 2011 which concluded with key players agreeing that the digital boom in the Middle East is not largely affecting the printing of paper as seen from the fact that UAE is among the highest consumers of paper in the world despite the increase penetration of electronic pads in the country.

Suresh Kilam, Executive Director, APP said: “With the recent unrest in some countries, the traders have grown more cautious and have adopted a wait and watch approach. They have to buy the paper in cash and they don’t want to take risks. So in countries which are going through rough political climate, the business is on hold but that doesn’t mean that the business isn’t growing in the Middle East and growth in countries like Saudi Arabia and Egypt is tremendous.”

On the side line of Paper Arabia 2011 Team Paper Mart had an interaction with Mr. Satish Khanna, General Manager, Al Fajer discussing about the paper industry in Middle East, development of the show over the years, their diversification plans and commitment to the show. Excerpts

Talking about the paper industry in Middle East he said: “It is very promising and is growing at the exponential rate. It has been on the move and the value of the Middle East printing substrates is forecasted to reach $5.0 billion in 2012. UAE is now on the verge of becoming the printing hub, earlier China did the same thing and their industry became number one. We need the same impetus. Paper converting is already booming in this region but for paper manufacturing I don’t see an immediate future.”

Highlighting the development of the show over the years he said: “People have accepted the show from the 1st year of its inception. Over the years we have only improved the quality of the exhibitors, which gives a very good platform for the visitors. Now, we need to grow in size and for that we have planned out some strategic moves which we will announce pretty soon. Presently, the majority of visitors are from trading community.”

On the diversification plans he said “this year we did the show in Kenya likewise we are planning to organize Paper Africa 2012 in Durban, South Africa. The paper industry has also shown the promising future in this region.”

On the success of Paper Arabia 2011 he told: “it’s the first-of-its-kind industry expo attracted over 6120 trade visitors from more than 85 countries. Big names such as APP, Abu Dhabi National Mill (ADNPM), Orient Links and others participated in full force in Paper Arabia 2011 and they introduced new technologies and products and concepts such as new textured tissue by ADNPM which received lot of attention by visitors. This year many companies offered environmentally friendly products based on agricultural or post consumer wastes.” 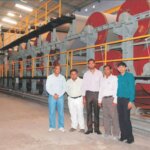