CII-Godrej GBC in partnership with Indian Paper Manufacturers Association (IPMA), Indian Pulp and Paper Technical Association (IPPTA) and Indian Agro & Recycled Paper Mills Association (IARPMA) organized the 12th edition of PaperTech conference from on August 29-31, 2018 in Hyderabad. The conference, with its continuous theme ‘Make Indian Pulp & paper Industry World Class’, focused on energy, environment, and water, three critical elements for the survival and competiveness of the industry. At the occasion, the 9th volume of ‘Best Practices Manual’ was also released.

Technologies and Ideas Together to Improve Mills’ Operations 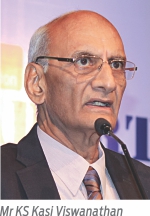 Mr KS Kasi Viswanathan, Chairman, PaperTech in his address to PaperTech 2018 underlined the necessity of attaining the world-class standards in mills’ operations, which can enable mills to perform better and conserve more. He said, “There are only a few mills in India who are closer to the world-class operations in terms of capacity, quality, and energy conservation and are becoming greener day by day. Although there have been improvements done by the Indian mills over the last few years, we still need to do much in terms of making our operations at par with the international standards.”
Mr. Viswanathan suggested that the Indian mills need to create forums of experienced workmen in order to collate and organize ideas which can result in innovations. “In order to make the mill engineers, operators, and managers better informed, we need to create forums. In those forums, we can discuss and find innovative ways to tackle the challenges. There are basically two ways in which the mills can see the improvements. The first one is the new technologies – even smaller mills can see a quantum jump in the operational efficiencies by implementing new technologies. The other one is gathering small ideas of all the employees and technicians to form bigger workable ideas, which can go a long way in improving operations,” he said.
Mr. Viswanathan also said that mills’ survival would become a great concern if they are environmentally compliant. He said, “If you are going to fight for a commodity which is for the public use (like water), you are bound to lose. It is our responsibility to reduce the water consumption and maximize the recycling. Such water conservation practices are not only cost-effective, but are also necessary for us to comply with regulations in place. Whenever there is an upheaval regarding the water usage, the first one to get affected is the industry. We need to be prepared for such inevitable situations.
“Independent of Papertech, CII has worked hard to develop a ‘GreenCo’ rating program which helps various industries including the pulp and paper industry to become green. The modules of GreenCo are energy efficiency (electrical and thermal), water conservation, renewable energy, GHGs mitigation, waste management, product stewardship, green supply chain, and life cycle assessment. As a part of the program, we also go to our vendors and customers and make them aware of what the program intends to achieve.”

Competitiveness is the Whole Purpose of PaperTech 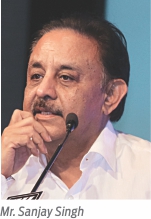 Mr. Sanjay Singh, Divisional Chief Executive, ITC, also the Co-Chairman of PaperTech, emphasized the absolute self-reliance in terms of technology and world-class operations, which would not make us dependent on extraneous factors. He said, “This is a favorable time for the Indian paper industry. Whatever is happening in the industry is not because of what we did; it is because of what countries like China and Vietnam have done, or even what the USA is doing. Their actions are helping us reap profits indirectly.”
He further said, “Wastepaper ban in China has made many industries shut the operations. This has resulted in an increased demand for the pulp. The hike in pulp demand has also increased the cost of pulp. Consequently, the prices of paper grades have also shot up. In the last 1.5 years, prices of all paper products have increased. Besides, because of the trade war between the US and China, the container prices from here to China have drastically reduced. As a whole, not only you are getting a higher price for the paper, you are also getting lower cost of shipping to China.”
Mr. Singh sounded a cautionary note saying, “This situation however is not going to last for too long. We shouldn’t forget that we belong to an industry which has always been struggling for survival. In fact, many mills have shut in the last few years. They are now getting revived because of the good prices. The whole purpose of the PaperTech is to bring competitiveness in the industry. It has been 9 years that we are doing PaperTech. We are telling people to reduce energy and water consumption because statutory norms in India are becoming stronger. To survive, the industry will have to manage its consumption parameters well.” Mr. P.S. Patwari, Executive Director, Emami Paper Mills said, “The total newsprint consumption is around 2.8 million tonnes. We however produce 1.2 million tonnes and balance demand is met through imports. The main feature of the newsprint industry is it being a 100 percent eco-friendly industry. Besides, we are creating regular direct and indirect employment throughout our industry. There are lakhs and lakhs of rag pickers, who are dependent on or engaged in the collection of wastepaper. Generally, people say that we recycle 30-35 percent of paper or even less than that. But in the case of old newspapers, almost 90 percent of them are being collected and 70-80 percent is supplied to the industry. The reader of the paper is reading a newspaper free of cost. Whatever he is paying for the newspaper, he is getting back by selling old newspapers.
“The growth of the newsprint industry is basically dependent on the print media’s growth. The print media in our country is growing at more than 10-12 percent per annum. The regional language print media are also growing. If print media is growing, newsprint demand has to grow, minimum with 5-7 percent per annum.”
Mr. Patwari also discussed some of the global events and actions which altered the domestic production landscape. He said, “The ban by the Chinese authorities on the import of inferior grades of paper about 9 months back because of the environmental reasons is going to stay. They have rather announced that old wastepaper which they are importing in China will be completely banned by March 2020. That is a good lesson and information coming for us as well. We can make our strategies accordingly.
“Because of the ban of inferior grade wastepaper, more than 2 million tonnes of newsprint capacity in China has been shut. The shortage is also felt by the packaging paper industry. The grades like kraft paper and duplex board are being exported to China. Earlier, Chinese were the exporter, but now they have become the net importer.
“There are some serious concerns as well. The surplus inferior quality wastepaper, which was supplied to China, is finding its way to India and this is a serious issue. We should be cautious and follow the rules and regulations by our authorities. We might otherwise end up worsening our situation. China has put the ban in a planned manner. They have given prior intimation to the industry; but here in India, it may happen suddenly. So be prepared!” Mr. B. R. Rao, Vice President, FPTA said, “There are 36 associations of traders all over India with a total strength of 10,000 people. We are working as a chain between the paper industry and the consumers. Also, we all know how difficult it is to make paper with the available raw material and make it both efficient and economical at the same time. But as a trader or a wholesaler, we have a different level of operation. We see that the product goes to the right candidate and there are fewer quality complaints. This is our role as a trader in the paper industry to bridge the gap between the manufacturer and the consumer.”
He added, “On August 1, 2018, as we celebrated the Paper Day, the 36 of our associations organized different activities which proved a grand success. We distributed 3,000 t-shirts among all the paper traders which they wore on the Paper Day. Whenever they were going to a program, a slogan ‘Love paper’ was printed on the badges and the t-shirts. We have started printing this slogan on a number of notebooks as well. We have also released a stamp on the paper day in order to make the Govt. accept August 1 as the paper day.”

IPPTA: Spotlight on Wastepaper and Agro Based Paper Mills 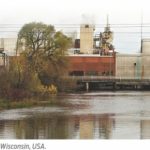 Practical Strategies to Reduce Pulp and Paper Mill Energy Use