SPCI 2011, held in Stockholm, Sweden, May 17-19, gathered 650 exhibiting companies from 30 countries in 230 stands covering a net exhibiting space of 10,500 sqm, and 9,064 visitors from 56 different countries. The new concept of bringing the conference down to the exhibition floor on three activity squares was well received by both visitors and exhibitors.

Some 160 speakers were part of the impressive conference agenda with 130 presentations/programme items on three stages, put together by the Swedish Association of Pulp and Paper Engineers (SPCI). The show integrated the conference with the exhibition with three lively squares. Also new for this year’s event was the fact that some of the major international pulp and

paper producing companies such Stora Enso and SCA successfully took part as exhibitors. While on the other hand leading companies like Andritz,

Metso and Voith were missing in the show.

“We are very pleased with the overall outcome of this year’s SPCI”, concludes Patrik Löwstedt, Exhibition Manager. “The exhibition really looked good, and exhibitors had put a lot of effort into the design of their stands. Most exhibitors seem happy with their results at the show”.

The evening events proved to be very popular. The formal reception on the opening night of SPCI, hosted by the City of Stockholm and held at the City Hall attracted almost 400 guests including the many international delegations. The more casual party at Restaurant Josefina’s on Wednesday night was attended by nearly 1000 people. 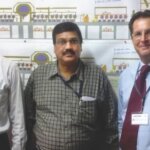