The content of this discussion is based on the vast study and experience on various Paper Machines and includes the references from the studies of various experts from the Industry.

One of the most requested improvements from papermakers is to help to improve formation along with drainage. Unfortunately, there is no single or simple answer to this. It is a question of examining and optimising each contributing factor in turn to gain small improvements from each.

The keys to achieving good formation are:

To Achieve Fibre Suspension at the Slice
The head box delivers a stock flow that is not only even in consistency, speed and thickness, but also has passed through and over various devices designed to create shear forces in the stock by adding turbulence to the flow. Cellulose fibres are mutually attracted by chemical and electrical effects and since every fibre collides with 5000 other fibres every second the speed at which flocs can form can be very fast. Some technical papers suggest speeds of 0.01 seconds for long fibres at high consistencies. During this time the stock will only travel 13cm. It is therefore possible that some flocs can start to form in the slice flow before the stock meets the forming fabric, with many more formed over the forming board and initial formation zone.

To Use the Lowest Consistency

Keeping the consistency as low as possible separates the fibres, giving the turbulence more time to act on the stock. More energy is used in prevention and less in breaking apart existing flocs. Unfortunately the stock approach and head box have limitations on the quantity of water that can be moved around, and on machines that have been up-rated for speed, this is often a limiting factor.

To Create Lateral Shear Forces in the Suspension

In the past most paper machines had shake mechanisms that introduced lateral shear into the stock at about 5Hz and formation was good. These machines ran at slow speed and today it is impossible to shake a wet end at effective speeds. Instead vertical movement of the stock is created and the collapsing peaks create lateral movement on a micro scale, hence micro turbulence.

Correct Amount of Turbulence at Each Point

Once the flocs have formed it takes a lot of energy to break them up. It is better to prevent them from reaching flocs by providing a continuous supply of energy ‘pulses’ or waves in the stock. There are a number of devices claiming to add turbulence to the stock. Some affect the slice flow but more are variants on the principle of passing the forming fabric over dewatering blades with a divergent angle cut onto the back surface.

The dewatering of a sheet on a fourdrinier machine takes place in four distinct phase:

The head box should be capable of delivering a uniform stock jet with well dispersed fibres. The jet should be projected onto the fabric at as small an angle as possible to minimise disturbance to the dilute fibre suspension.

A Forming Board is used to:

ZONE 2 – FORMATION
Control of water removal is critical in the formation zone. Excessively high or low water removal rates can cause trouble and increase two-sidedness. Gentle drainage with carefully controlled turbulence is required to achieve good formation, smooth variations coming from the headbox and keep the fibre mat open.
Excessive turbulence, such as a table roll can give, tends to flood the sheet and loosen the fine fibres and fillers which are then drawn through the fabric by the vacuum created as the roll rotates away from the fabric surface. This effect is magnified as the machine speed increases. Alternatively, excessively rapid drainage in this area will compact the fibre mat making further drainage difficult – this known as sheet sealing.

ZONE 3 – DRAINAGE
Once the sheet is set process of consolidation can begin; drainage force is increased progressively introducing Vacufoils and Duovac units – low vacuum foils – which are designed to provide a smooth transition for the sheet from the gentle foil action to the heavy drainage forces developed over the dry suction boxes.

ZONE 4 – HIGH DIFFERENTIAL PRESSURE STAGE
At the dry line the water is removed from the majority of the capillaries in the fibre mat (not in the individual fibres) and numerous air passages through the mat from top to bottom.
At this point low vacuum are no longer effective in removing water and it is necessary to use large volumes of air to wipe the water from the fibre surfaces and crossovers. The high differential pressure created tends to further compact the sheet, closing the capillaries and making the air flow more effective in carrying water out of the sheet. Here again the pulsing of suction box vacuum from slot-to-slot and box-to-box causes a continuing compression and relaxation of the sheet, resulting in a final sheet strong enough to overcome sheet transfer tensions, draw and pressing forces.
We should understand that the objective of the forming process, i.e. Head to couch, which is normally spelled as “Wet End” is to produce a sheet of paper, in which fibres are uniformly distributed and the surfaces are smooth and uniform. 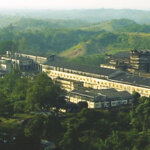 Central Govt. to Revive Pulp and Paper Mill in Nagaland 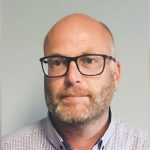