Alleging that the country’s current import policy on newsprint has adversely affected the local paper mills, the Indian Newsprint Manufacturing Association (INMA) has sought an amendment in the policy.

A meeting regarding the same was held among the representatives of Directorate General of Foreign Trade (DGFT), Department of Industrial Policy and Promotion (DIPP), Indian Newspapers Society (INS) and INMA in New Delhi on 11 August 2015. The meeting was held under the chairmanship of SM Khan, press registrar, Registrar of Newspapers for India (RNI).

At the meeting, representatives of the INMA said, “Though the legislative intent as emanating from the language of the Licensing Note is that the import is permitted to the registered newspaper publishers holding valid eligibility certificate issued on the basis of actual user condition by RNI on submission of necessary documentary evidence, authenticated by RNI to the satisfaction of the custom authority at the time of clearance of goods, a number of traders are importing consignments in their name under the bill of lading showing the traders as consignee, clearing their consignments in their names under bond bills of entry filed under Section 59 of the Custom Act, 1962 and warehouse the consignment for further sale.”

The representatives added, “By manipulating ambiguity in policy provisions, these traders have created a parallel industry with active involvement of the manufacturers abroad, which is adversely affecting the domestic newsprint manufacturing industry.” 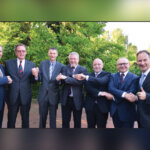 GapCon: For an Indo-German Technical Excellence