A Mid-way Solution to Technology Requirements in India - Papermart
FacebookTwitterLinkedinYoutubeEmailWhatsapp

PMP being specialist technology churner for the paper industry has a host of cost-effective yet global technology offerings fine-tuned to India’s requirement.

PMP (Paper Machinery Producer) – a global provider of tissue, paper, and board technology, has been supporting pulp and paper industry for over 160 years. The company with headquarters in Jelenia Góra, Poland, owns six facilities in four countries (Poland, USA, China, and Italy).

Prior to the year 2000, due to historical, political and economic reasons, the company’s name changed from H. Fullner, Fampa, Beloit Poland to finally be established (in the year 2000) as an independent, global corporation – PMP Group. With a yearly turnover of around 48 million EUR (in 2015), this company gave employment to over 650 people in Poland, China, United States, and Italy. Within the last five years PMP reported a sales increase of nearly 28 percent.

Tell us about PMP and your association with Filfab Global?

Pitor Jasiuk: It has been 160 years since PMP became involved in the paper industry. During those decades, the company went through many transformations and takeovers. The name changed from H. Fullner, Fampa, Beloit Poland to finally be established (in the year 2000) as an independent, global corporation – PMP Group. Filfab is the company representing us in India for more than 10 years.

Navnit Garg: Basically, PMPoland S.A., or PMP Group, was formerly used to be Beloit Corporation, which was in its time the largest paper machine manufacturer in the world. The present day PMP, an American-Polish joint venture, used to be Beloit’s centre of excellence in the technology for headboxes. After Beloit became PMP in the year 2000, they have installed over 130 headboxes around the world until now. Their latest technology on shoe press is just cutting-edge and is really worth seeing as to how it works and how easy it is to run with least maintenance. I don’t think PMP’s Intelli-Jet V® hydraulic headbox has got any competition in the market.

PMP basically manufactures entire paper machine and has got another division in which it manufactures tissue machines and crescent formers. The group has supplied a number of tissue machines in Asia that are running successfully, particularly in countries such as Indonesia, China and some more. In India, right now, there is considerable interest being shown in PMP’s products and that’s why Mr. Pitor Jasiuk has been coming very frequently to India. We are very serious contenders in some of the major projects which are about to happen in India. Let’s see what happens!

As has been witnessed of late that Indian paper industry is increasingly orienting itself towards proven technology to compete with global benchmarks. What kind of role do you see for PMP in fulfilling the technological expectations of the industry?

NG: PMP being the leader in paper machine technology would certainly be instrumental in equipping the Indian paper industry with world class machines and equipment for increased efficiencies with desired cost reduction. PMP’s core advantage, when it comes to technology and workmanship, is that it can only be compared with few companies at the top, viz. Voith and Metso. However, PMP’s technology comes a bit cheaper as compared to that of those companies, may be because PMP is based in Poland, a country where cost and prices are still rather economical from European standards in contrast with countries like Germany or Finland.

The Indian paper industry has always been desirous of investing in the latest technology, but it has been wary of huge cost involved at the same time. Therefore, the rate of adoption of current or fresh technology is slower in India and only few top mills do it on a regular basis. In such scenario, PMP is quite relevant for the Indian industry, down to the small mills, being one of the most cost-effective technology providers.

Please elaborate more on the salient features of your technology with underlining R&D involved to make it better.

PJ: PMP not only makes complete paper and tissue machines, but offers rebuilds and upgrades services of existing paper and tissue lines under the brand name Phoenix Concept™. Product portfolio in this area covers everything from hydraulic headbox, dewatering unit, shoe press, metering size press (film press), etc. Among the new sections what PMP can supply is the widely appreciated Intelli-Jet V® hydraulic headbox, which is technologically advanced equipment characterized by reliable and long-term performance. The headboxes have been appreciated for their proven and user-friendly design, consistency in cross direction profiling, and the highest manufacturing standards (low roughness, hastelloy tips). These headboxes are easy to maintain and clean-up and are being suitable for all grades of paper.

Then, there is another section which we supply, i.e. shoe-press Intelli-Nip®. PMP has put a great effort into developing the shoe press. The technology included in the unit improves, in comparison to a conventional press, dewatering level of the paper web after press section. Despite higher energy consumption used in the drives, the press allows to decrease the steam consumption used for heating drying cylinders. As a result, the dryer section can be shortened.

We practically offer all paper and tissue machine sections right from stock preparation to reels, apart from providing the entire paper and tissue lines. In all our products, there is a tremendous R&D effort involved to make them cutting-edge, long-performing, and cost-effective. We have right now over 100 turnkey customers and more than 160 projects within last 10 years. This is a good experience for us that we can supply according to needs of our customers.

NG: PMP invests heavily on research and development and by virtue of that over the years they have remained among front runners, competing with names like Voith, Metso and others. Without consistent development, PMP could not be in the position where it is now. R&D is reflected everywhere in its machines and equipment from headboxes and shoe presses to entire paper and tissue lines. R&D and engineering analysis are deeply ingrained into PMP’s philosophy.

As said, you have been profusely travelling to India of late. What changes do you perceive in the Indian paper industry as regards to readiness for new technology?

PJ: I see a lot of positive changes in the Indian paper industry as far as technology is concerned. I have also noticed this desire in every mill to go for better and newer technology; their focus has now shifted to technology as it has become indispensable for survival. Paper mills now are trying to locate good suppliers who can provide them the newest global technology in affordable price in order to enhance the product quality to a level which can compete with the best in the market. Paper makers are contacting us and are discussing mainly issues faced with headboxes, shoe press, metering size press, etc. They are asking how to standardize the equipment or replace it with better ones. This is the base equipment the customer wants from us.

NG: The best aspect of Indian paper industry is working out the best in spite of limitations like inferior quality raw material available and that’s commendable. These limitations and desire to produce the best have resulted in a realization to adopt the best available technology. Many have felt the benefits of better technology in terms of return on investments, for example, Mr. Pawan Agarwal of Naini Group was seen as saying during recently concluded IPPTA that how he got ROI sooner than projected with better shoe-press technology.

We are generating a lot of enquires on how to go for better paper machine sections and I am sure those would be converted soon. So far as technology is concerned, customer knows that we are capable of meeting their requirements in terms of technology, but what comes in between is the price part and India is very price-sensitive. For some customers, shoe-press is just a shoe-press irrespective of brands they are produced with. So, convincing these customers on quality of technology is hard part; we have to tell them it’s PMP in the form of erstwhile Beloit which invented the first shoe-press and we are the best there. We also have to tell them that we are the best mid-way solution for cost and quality. 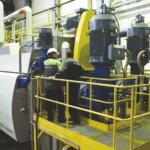 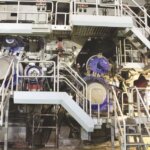