The copmany has developed specialised LPB-processing lines for two basic capacities of 20 – 25 tons and aprox. 50 tons input material per day

Liquid Packaging Boards (LPB), often wrongly called Tetrapak, which is actually the name and the registered trademark of their best known producer, significatly exceed the other paperboard packaging materials due to their specific composition and properties which must be considered in all the phases of the recycling process.

There are two basic LPB groups:

• approx. 80% of their total production are represented by 6-layer aseptic shelf-stable cartons to be stored and merchandised at normal temperatures, composed of approx. 75% paperboard, around 20% polyethylene (LDPE) and some 5% aluminium;

• approx. 20% are 3- or 4-layer refrigerated cartons made of approx. 80% paperboards and 20% LDPE.
Total LPB basis weights are usually 200 – 350 g/m2. The top layer is almost always offset-printed which requires using coated cartonboards. The recycling process is further complicated by the fact that there are used boards based on virgin and recycled, bleached as well as unbleached fibre raw materials. Usual sources of the recycled raws are LPB manufacturers’ wastes and a municipal collection. As the municipal sources are usually more abundant, designing the recycling processes one should presume that

Interested parties requesting the LPB recycling equipment often overestimate the respective market recycling opportunities. In the Czech Republic, a typical European country with a high waste recycling rate, the LBP per capita consumption in the year of 2010 was 1,7 kg. Thus, at recycling rates around 20%, the available source in the 10 million country is not more than approx. 10 tons input material per day.

The company PAPCEL, Czech Republic, thanks to their long-term rich experience in manufacturing the equipment converting recycled paper fibres to the forms utilisable for papermaking, developed specialised LPB-processing lines for two basic capacities of 20 – 25 tons and aprox. 50 tons input material per day. (The capacities are linked to the amounts of input material, the output quantities are significantly variable depending on input stuff composition and contains of non-paper impurities and they represent usually 60 – 70% of inputs.)

Compared to the other kinds of stock preparation lines (SPL) preparing recycled papermaking stock, the basic difference when designing and economically assessing the SPLs processing LPB consists in considering non-paper input mixture portions to be largely saleable raw material and not only useless reject. Therefore the parties interested in the LPB recycling SPLs should get straight before submitting inquiries:

• whether their plant is to be directly followed by a converting capacity or whether and how far from their plant they are going to despatch their products;

• whether and how high there is a demand for the non-paper part of their production, i. e. mixtures of PE-foils with aluminium.

From the aforesaid facts there follow the main differences of the LPB processing lines compared to the common SPLs, briefly:

• unlike low consistencies (up to 5%) in pulpers for common input raw materials, LPB is pulped at 12 – 15% in the MCV type machinery;

• the higher capacity lines use two pulpers, the smaller one used for intermittent flushing PE-foils;

• a great attention is paid to processing rejects in all the screening stages, to their thorough multiple flushing and to separating saleable material from useless reject;
• also LPB lines water processing is more complicated as it works with three grades of circulating water purity;

• if the line is not followed by a plant processing its products the output material must be in addition dewatered onto dry matter values enabling reasonable shipping (at least 50%);

• the lines must be designed single-purpose, the trials to design lines alternately processing LPB and other recycled papermaking raws by now have not been successful. 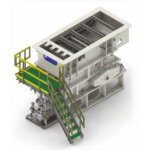 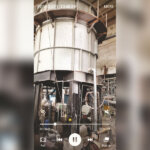 Water Conservation to Clarify the Reject of Centricleaner Effluent