Metso has received a repeat order for two complete tissue production lines for the Turkish Hayat Kimya A.S. Each production line will include an Advantage DCT 200 TS tissue machine, and they will be installed at the company’s new mill sites near the city of Alabuga, Tatarstan, in Russia, and in the city of Mersin in southern Turkey. The start-up of the tissue machine to be installed in Russia is planned for the second half of 2014, and the second tissue machine will start up in Turkey at the end of 2015. The value of the order will not be disclosed.

The order follows the successful start-ups of two similar tissue lines supplied by Metso in 2010 and 2011.The tissue machine located at the mill in Yeniköy near the city of Izmit, Turkey, holds the world record in speed for tissue machines at 2,210 m/min. 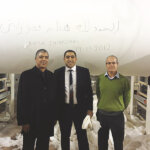