The SHIELDPLUS® was created by providing paper, made from renewable resources of wood, with a barrier coating layer based on the water-based coating technology for papermaking.

Jujo Thermal Oy. has been developing “SHIELDPLUS®” embedded with oxygen and flavor barrier properties and has already entered the market evaluation stage. With this capital investment, the Company aim to start full-scale production in Europe.

Nippon Paper Industries had commenced studies toward production of the SHIELDPLUS® series of paper-based materials with barrier properties. The Company developed this series and released it in Japan in November 2017.

Amid a globally mounting interest in paper materials, the SHIELDPLUS® series attracts attention in Japan and overseas as one of the Company’s paperising solutions. 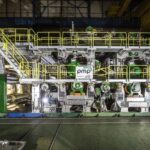