The expansion project doubled the Östrand mill’s production capacity from 430,000 tonnes to 900,000 tonnes per year of bleached softwood kraft pulp.

Valmet announced that a new pulp production line it supplied to SCA’s Östrand mill in Timrå, Sweden successfully started up at the end of June. SCA invested SEK 7.8 billion in the pulp mill expansion project making it one of the largest industrial investments in Sweden to-date.

The expansion project doubled the Östrand mill’s production capacity from 430,000 tonnes to 900,000 tonnes per year of bleached softwood kraft pulp.

“The rebuild and expansion of Östrand pulp mill is one of the greatest industrial investments in northern Sweden ever. In spite of complexities such as building a twice as big pulp mill in a running mill, we started up the new plant on schedule and budget,” said Ingela Ekebro, Project Director, SCA.

The project was implemented in phases, and the new evaporation plant was started up some months before the cooking and fiber line. Very soon after the start-up, pulp was produced with high strength, purity and brightness.

In the next phase, production will be ramped up gradually towards the new nominal production capacity. 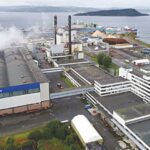