In continuation of our new segment “Young Turks” started in the last issue. This time we did it with Mr. Pawan Agarwal (Jt.MD) Naini Group. The reason behind taking him for the same was that he is a man doing business with a clear vision and away from the league. Being in the paper industry his understanding of the branding the business is commendable. His inclination towards better environment for all is something admirable.

“I did my engineering from IET Lucknow but my mom wanted me to do, civil services. I went for it, qualified for the preliminary exam, cleared it likewise, qualified for the mains and cleared it. But wasn’t able to clear the interview. My mom was of the opinion that I should try it again but I didn’t feel like to go through the whole process”, he said with a broad smile.

Entry in the Paper Industry was merely a decision of a discussion with his father, where they were thinking of entering into some business. As they were already into agro industry and were making seed plants. So, they thought of going into the agro based industry. Moreover, there were few paper mills in the area which were flourishing. So, the main driving force was locally available raw material, growing market and home advantage. It was a humble starting in 1996 with a 50 TPD kraft mill under the name of Naini Papers.

Enlightening us about how he measures the success he said “We don’t go by the financial numbers, and as far as I believe the success of an organization is measured by its reputation in the market and, Naini has got that respect and brand image in the market. We are respected for our business policies and quality consistency by our suppliers, consumer’s etc. We have always delivered all our promises.”

The other parameters of success according to him was: continuously upgradation of technology, quoted with an example: “when we started our production in 2005, people told us to make 84 brightness paper and, when we produced 88 brightness product, people were shocked that how come we got this brightness with agro residue. Now we produce upto 90 brightness and most of our competitors have copied us. This means that we have always taken the technological lead.”

He quoted “where there is a will there is a way” and he learned it in a very hard way. At the initial start of the business people used to say to him “that you cannot sell the kraft paper with 100% invoicing, you have to manipulate the invoicing process.” With the idea of doing the business ethically, soon they were among the very few mills that were doing business with green channel and they have reaped benefits of it. The biggest learning of his life was that, if you have some philosophy or policy in mind and you have the will to do it, nothing will come in between you and the success.

In the organization he has inculcated the feeling of loyalty by making the communication process transparent with everyone associated with them whether they are suppliers, customers or service providers etc.

He answered: “Inefficient and poor technology”

He further added: In 1999, we were “drained out financially” and put the unit for sale.

Nobody came for buying but one gentleman advised them to make absorbent kraft paper, and they were in the dilemma whether to go for it or not and that too with bagasse. In March 1999 they developed the product which was the turnaround point for their business. They kept on improving the product and gaining market share. Finally, in 2001, they were producing 100% absorbent kraft with a market share of 35-40%. And, when Naini Tissues was planned they kept in mind to go with sound technology and thus opted for a Metso headbox apart from investing good amount in pulp mill.

“I would like to say that with the mills of our level, technology is not the hindrance anymore, it is an opportunity.”

To tackle with the “scarcity of bagasse” they have installed a crusher to utilize alternate agro residue i.e. the kolu bagasse. They have also developed sarkanda fiber as an alternate raw-material which comprises almost 20% of the total requirement. Also, they are in constant touch with CPPRI for the research & development and are doing a project with the Aligarh Muslim University for removing color from the effluent.

Business always comes second to us. Two things are very important for us, first is the business ethics and other is that we don’t tell a lie, we work with total transparency, with our suppliers, vendors etc. We believe in long term loyalty, this is what we have instilled in our business as a group. We are responsible to our society both socially & environmentally. We are highly environmentally conscious.

Moves for the Environment

“When we initially started, we were told that pollution is the necessary evil for the paper industry, and we thought that if it is a necessary evil than why we are making paper at all, it should not happen”, recalled Pawan. In order to improvise on the environment footprint, Naini had set up the country’s first chemical recovery plant in an agro based kraft paper mill. While, everybody was skeptical that it would be successful and suggested to invest in a paper machine instead of a recovery plant, they finally achieved success in 2003. Further Naini had done good work on water consumption level also by reducing it to 65KL as against the norm of 150KL per ton of paper. Their efforts were recognized by CPCB and CII.

Continuing the pioneering efforts, they have installed a membrane technology for zero discharge. Under which after the pre treatment of effluent it is passed through a set of organic membranes and after the clear discharge it is ready to be used anywhere. Their project has already been approved for less than 10 BOD and less than 100 COD, which are well ahead of the industry norms.

Naini have also gone for the brand path audit, done by Newtons India. They have created a brand path for them and simultaneously creating the brand image for the product and brand equity for the company. The new tagline of the company states “Ethically Firm Environmentally Strong”. Naini plans to hire a brand ambassador too in near future.

Naini had recently initiated an environment division to help the paper industry to overcome their environment problems, especially the mills situated near the Ganga river area. They have got some technological breakthroughs, and have tied with some of the companies internationally apart from a team of experts. The laboratory is being accredited by NABL, which will make their reports acceptable by the pollution control board and other government offices.

Your Idea of happiness: You can always be happy in any of the situations; I don’t carry my problems with me and try to sort it out then & there only.

One thing you say to yourself: nothing is impossible, try your best and be honest!

In free time you do: Read books, Watch T.V., a bit social, and enjoys taking family for dinner 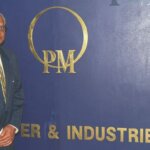