The nation’s paper manufacturers are branching out into sectors such power generation and battery components as well as expanding operations elsewhere in Asia as demand for traditional paper-based products shrinks at home.

Japan’s market for paper is contracting due largely to the nation’s aging population and dwindling birthrate as well as the widespread use of electronic devices such as smartphones.

Industry leader Oji Holdings Corp. is expanding production of corrugated board and paper containers in Southeast Asia and India. In November 2014, the company decided to build a new plant for corrugated board in Vietnam as its 22nd manufacturing base in Southeast Asia and South Asia. The decision was in line with Oji’s plan to focus more overseas, aiming to make 50 percent of its total annual sales in foreign markets by fiscal 2020.

Hokuetsu Kishu Paper Co., Japan’s biggest manufacturer of white paper board, used for such products as candy boxes, launched production at a plant it built in China’s Guangdong Province in January.

In the household paper product market, the production of paper diapers is increasing because of their high profit margins. Daio Paper Corp. plans to build plants in China, Thailand and Indonesia to produce paper diapers for children. 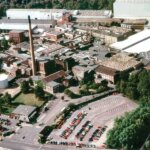