February 17, 2015
Södra and Statkraft have signed a cooperation agreement to start a jointly-owned company for the future production of biofuel at the former Tofte pulp mill in Norway. The company will be named Silva Green Fuel AS, and will be 49-percent owned by Södra and 51-percent owned by Statkraft.
According to Södra, the company’s first task is to find a cost-effective technology for profitable production of second generation biofuels based on forestry raw materials. A future commitment depends on whether the authorities facilitate the increased use of biofuels through tax changes and other attractive incentives.
“Statkraft views forest-based biofuel as a potential new growth area in renewable energy. I think that the collaboration with Södra constitutes a solid basis for developing a commercially-viable and profitable project,” said Christian Rynning-Tønnesen, CEO of Statkraft.
Södra’s CEO, Lars Idermark, added, “Södra is monitoring closely the technology developments and the business opportunities presented by the utilisation of forest raw materials for industrial production of climate-neutral fuels. We have also enjoyed good collaboration with Statkraft in the past and look forward to combining the two companies’ expertise and experience in this project.”
Statkraft has taken over all the shares in Södra Cell Tofte AS, which owns the former pulp mill site at Tofte. The site is favourably situated for a future venture into the area of biofuel: The location already has an established infrastructure to handle large volumes of wood and it is located centrally in eastern Norway, with an excellent deep-water harbour.
Statkraft is a leading company in hydropower internationally and Europe’s largest generator of renewable energy. Statkraft has 3,700 employees in more than 20 countries.
Södra is a group with extensive forestry operations and a leading producer of paper pulp, sawn timber and bioenergy. 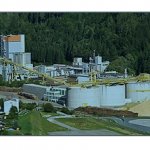 Fiberline at Mondi Frantschach's Pulp Mill to be Upgraded by Andritz