Cook visited the forests with representatives from Iggesund Paperboard, a company that sits under the Holmen Group umbrella and makes fiber paperboard.

Apple CEO Tim Cook has been visiting forests in northern Sweden with a company that supplies Apple with sustainable packaging.

Cook’s social media accounts show that he has been all over Europe this week, visiting cities such as London, Paris, and Normandy along the way.The CEO’s latest stop on Thursday was Sweden, where he briefly visited Apple’s Stockholm office, before being whisked away in a black Mercedes. Cook then visited what he described on Twitter as the “breathtaking forests” of northern Sweden.

Cook visited the forests with representatives from Iggesund Paperboard, a company that sits under the Holmen Group umbrella and makes fiber paperboard. Holmen has secretly been supplying Apple with packaging for products like the iPad for over a decade, according to Swedish news site DagensIndustri (Di).

While in Sweden, Cook reportedly met with Holmen’s CEO HenrikSjölund at Holmen’s factory in Hälsingland.” This has been secret for so many years. It’s nice to get some cred when he came and greeted us after more than ten years of development work together,” Sjölund reportedly told Di.

Iggesunds pecialises in making multi-layer cartons out of chemical pulp. The cartons are designed to bend without cracking, according to Di. Highlighting how important Holmen’s relationship with Apple is, Sjölund reportedly said, “They are extremely careful and demanding and it has clearly contributed to our product development.”

Cook reportedly visited the factory where the packaging is made and planted some pine trees while in northern Sweden. 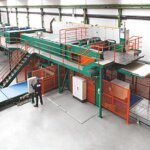