Valmet and Metsä Fibre have signed a preliminary agreement for key technology and automation delivery to the planned Kemi bioproduct mill in Finland.

Valmet and Metsä Fibre, which is part of Metsä Group, have signed a preliminary agreement according to which Valmet will deliver key technology covering all main process islands and automation systems to Metsä Fibre’s planned Kemi bioproduct mill in Finland.

The final agreement is subject to Metsä Fibre’s investment decision. Metsä Fibre has announced that the readiness for the decision is expected to be reached during autumn 2020. If materialized, the new bioproduct mill would have an annual pulp production capacity of 1.5 million tonnes and in addition produce various other bioproducts. The production of the new mill is scheduled to begin in 2023.

The estimated value of Valmet’s anticipated delivery for Metsä Fibre’s planned Kemi bioproduct mill, covering the core equipment supplied by Valmet, is about EUR 350-400 million. The anticipated delivery will have an important employment impact on Valmet and its subcontractors. The employment impact of Valmet’s project delivery is expected to be around 800 man years, out of which about 500 man years in Finland.

According to the preliminary agreement, Valmet will deliver the full production process from wood handling to ready pulp bales designed to produce either softwood or hardwood pulp, as well as automation system for the whole mill including features from Valmet’s Industrial Internet offering. Additionally, the project would include a smaller rebuild of the existing pulp mill.

Valmet’s delivery would include engineering, procurement, supply and construction management of the wood handling, cooking and fiber line, pulp drying and baling, non-condensable gases (NCG) handling solution, evaporation, recovery boiler, recausticizing, lime kiln, biomass dryer and gasifier. In addition, Valmet would deliver the sulfuric acid plant and rebuild of the existing fiber line and power boiler with an extended scope of supply including construction. The integrated Sulfuric Acid Plant, which produces sulfuric acid from mill’s own odorous gases, was originally developed together with Metsä Fibre for the Äänekoski bioproduct mill. 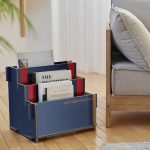