Helping to Save the Planet - PIECE BY PIECE - Papermart
FacebookTwitterLinkedinYoutubeEmailWhatsapp

Sun Paper’s Honghe mill, based in Shandong Province, China, needed a tailor-made handling system to process rejects from two OCC production lines feeding its PM 31 and PM 32 papermachines. ANDRITZ successfully delivered one system in 2016 which has been quickly followed by a second. When the Chinese central government makes rules or laws, it enforces them far and wide and with extreme speed and effectiveness. Along with many other environmental restrictions brought in lately regarding industrial emissions and levels of pollution, it also banned the use of landfill, causing pulp and paper producers across the country to look long and hard at production processes. And particularly at the way rejects from recovered paper production are managed.
One of those companies right in the middle of all the environmental reforms taking place in China is pulp and paper giant Sun Paper. Not that there is any anxiety or concern surrounding its environmental credentials – the company has always prided itself on being ahead of the game when it comes to environmental performance. But what was becoming a problem was the quality of recovered paper and the amount of contamination that comes with it.
Guangdong Ying, Vice President and Chief Engineer at Sun Paper says, “We have plenty of customers wanting our product, we are approaching production of around 2 million tonnes a year of high quality packaging board. But the problem is the quality of the recovered paper, the sorting system in China is not really good yet, and needs improvement. A lot of truck loads come in to our mill with all sorts of contaminants, plastic and metals and even kitchen waste. 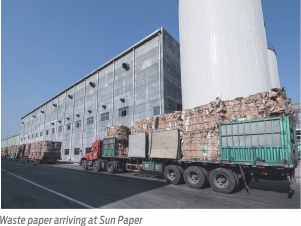 “We decided around three years ago that we needed to consider installing a really good reject handling system to help improve the management of the rejects, and then of course in came the landfill regulation as well.”

Something New, Something Better

Sun Paper is one of those hugely successful Chinese pulp and paper enterprises that has seemingly risen from nowhere to become a giant. Founder and president of the company Li Hongxin, started selling paper from the back of a motorbike in 1982, now heads a company that is in the Top 50 of the world’s largest pulp and paper companies. And Sun Paper prides itself in only installing the very best when it comes to technology across its mills and plants. 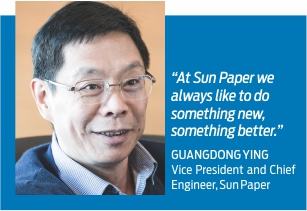 Ying says, “At Sun Paper we always like to do something new, something better, and of course something our competitors are not doing.
“We took a trip to Europe to have a look at ANDRITZ reject line references and were very impressed – ANDRITZ is the obvious leader in this field.”

The New Line: The Only One in China

In June 2014 Sun Paper ordered a reject line from ANDRITZ that would process 200 tons of light rejects per day from both pulping lines on PMs 31 and 32. The line started up in the summer of 2016. 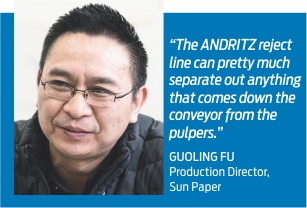 The pulping system for PM 32 was also delivered by ANDRITZ at the same time, which helped when it came to installation. The reject line was later upgraded to include a heavy duty ANDRITZ Franssons Shredder FRX2000, which was installed in June 2017.
Chen Fang, Sales & Marketing Director, ANDRITZ Pulping, Fiber and Recycling Division, says, “The reject line from ANDRITZ is pretty much perfect for what Sun Paper needed for the waste-to-value process, and of course avoiding any landfill use. The reject system basically sorts and converts the mill waste rejects either into something that can be sold – for example metals – or into waste that can be burnt in the boiler, therefore creating energy.”
The scope of supply at Sun Paper included coarse and fine shredding systems, a ballistic separator, reject compactors, sand separators, as well as coarse and fine metal separators including ferrous and non-ferrous metal separation. 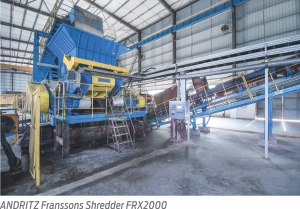 “The initial start-up went according to plan,” says Li Feilong, ANDRITZ Pulping, Fiber and Recycling Division, Senior Project Manager, “Although it must be said the reject line was a bit of a steep learning curve as this was a first for the ANDRITZ team in China, as well as for Sun Paper.
“However, from the system coming in to running was just one week and from commissioning to start-up was just 24 hours!”
The later addition of the ANDRITZ Franssons FRX2000 shredder helped to increase the capacity of the line with its innovative CoverCross knife system and pusher technology.
“The ANDRITZ reject line can pretty much separate out anything that comes down the conveyor from the pulpers,” says Guoling Fu, Production Director, Sun Paper. The line at Sun Paper can dewater, fractionate, shred, and separate waste paper contaminants such as plastic films, textile scraps, tying wires, and pulper rags.
“Ultimately this means that we can separate the impurities either for burning in the boiler, or selling on for scrap as in the case of metals. Most importantly for us, it means nothing goes to landfill.”
Needless to say, Sun Paper is very happy with the new reject line, and has ordered a second one which will be starting up later this year.
Ying concludes, “We only have one Earth, it’s our common home, and we must keep it clean!”

As the SPECTRUM team returned to Beijing after our visit to Sun Paper in Shandong Province, the sky was blue and the air was clear and the Chinese newspapers were declaring that the government’s war on pollution is reaping rewards. Clearly the massive operation being undertaken by the Chinese Government, along with companies like Sun Paper using top technology to reduce environmental impact, is beginning to pay dividends, bit by bit, and reject by reject. 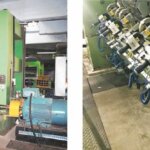 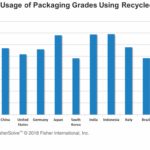