KPPL can commence the operations with the production of newsprint grades of 42 GSM & 45 GSM while the printing paper of 52 GSM-70 GSM, mainly for notebook and textbook segments, the Minister said.

Kerala Paper Products Ltd. (KPPL), erstwhile known as the Velloor-based Hindustan Newsprint Ltd., has started the commercial production of newsprint grades of paper. The state government-owned paper mill had shut down its production about three years ago, attributing it to its poor financial health.

As published in a leading daily, the Chief Minister of Kerala Pinarayi Vijayan inaugurated the commercial production at the facility. According to the Minister for Industries, Law, and Coir in the Government of Kerala P. Rajeeve, the revival of the public sector unit signals an alternative model of industrial development. Furthermore, by taking over the company which remained defunct for a long period of time, through a resolution plan, the Kerala government has rolled out a strategic plan in four phases for its revival and sustained operations.

The outlay for the revival plan consisting of the first two phases of KPPL would be INR 154.39 crore. Further, the third phase envisages capacity expansion and product portfolio diversification, with an investment of INR 650 crore in 27 months.

KPPL can commence the operations with the production of newsprint grades of 42 GSM & 45 GSM while the printing paper of 52 GSM-70 GSM, mainly for notebook and textbook segments, the Minister said.

The fourth phase of operations will be directed towards realigning the existing machinery for the production of packaging grades of kraft paper. It requires an investment of INR 350 crore, and 17 months are planned for its implementation. In the final phase, the company is expected to attain a turnover of INR 3,000 crore and more than 5,00,000 TPA of production capacity.

The initial production at the mill has been planned to utilise its own captive de-inked pulp and purchased pulp from the Tamil Nadu Newsprint and Papers Ltd. (TNPL). Afterward, the mill would undertake production with its own pulping streams in the future. 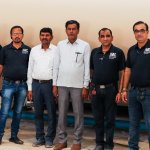 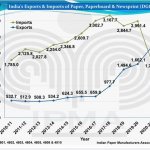 Paper Exports from India Surges by about 80 Percent in FY22