Wood fibres are recyclable, renewable and biodegradable – that’s why they are regarded as a wonderful resource in today’s world. When processed into chemical pulp, they become an ideal sustainable raw material for paper production. Pulp producers, therefore, need to be completely transparent and ecologically responsible; they should never forget that responsible forest management is key to a sustainable raw material supply.

It is hard to believe that the world produces more than 160 million metric tons of chemical pulp from wood every year. More than a third of this quantity comes from North America; pine trees and spruces are the main base products here. A major part of the chemical pulp is produced in integrated mills, which directly use the raw material themselves for their own paper production. Pulp producers in America sell around 15 per cent of their production as market pulp to customers and use the remaining 85 per cent for their own consumption.

Regarded as one of the most important growth markets for the chemical pulp industry, the South American region has nearly doubled its share of global production in the last ten years. Many of the pure pulp mills in this region sell their product to the market. Around 90 per cent of the South American chemical pulp is exported – mainly to Europe, China and North America. The region’s success can be attributed to its geographic situation. Pulp production depends heavily on local conditions such as climate and soil composition. These factors have a big impact on the choice of the type of wood that is planted. South America – especially Brazil – profits from conditions that are well suited to the cultivation of eucalyptus. Its huge productivity has given the region high growth rates in pulp production in recent years.

Ever since the 1990s, environmental aspects have been high on the pulp-production agenda, and many producers insist on complete transparency. They invest in cultivation of the forests as a renewable and sustainable resource and are genuinely concerned with maintaining the delicate ecological balance.

Consider, for example, the Brazilian company Fibria. Owner of around 1 million hectares of forest area (an area almost as large as Hawaii), it specialises in the cultivation of eucalyptus. Fibria gives a lot of importance to sustainable action: It has well-defined short-term and long-term sustainability goals, a sustainability committee that advises the management and an exhaustive annual sustainability report that gives information about all activities in this area.

Fibria cultivates not more than two-thirds of its forest estate. Instead, it protects the local native forest and thus the diversity of species. In the remaining area, eucalyptus plantations are operated in accordance with the latest findings and the most environment-friendly methods. Native forest is combined with plantations. This type of management encourages a good habitat for a variety of wildlife. Fibria planted around 70 million seedlings in 2012. As a result, it could draw an exceedingly positive balance in that year: Its own forests absorbed 3.8 million more tons of CO2 than it emitted as a whole.

In addition, Fibria regularly conducts environmental studies to measure the effects of its own actions and to constantly improve its forest management. It monitors the local flora and fauna, the soil and the water resources. The company is also working on new types of eucalyptus that reduce the effects of plantation management on the soil and the environment and at the same time increase the yield per hectare. Besides, around 80 per cent of forest stands have FSC or CERFLOR certification.

South American market pulp is finding broad acceptance worldwide, thanks to high environmental standards in South America’s production of market pulp. The producers in this region are among the leading developers of a wood resource that is planted and harvested in a responsible and sustainable manner. There is one more reason for the rising demand: Brazilian eucalyptus trees are used more frequently for chemical pulp production as they have a huge economic advantage. Because of the climate, they are already fully grown after about seven years. With a yield of 44 m3 per hectare per year, they are by far the most productive resource for chemical pulp. By contrast, eucalyptus trees in southern Europe need 13 years and North American pines need a full 25 years before they can be processed.

Other Kinds of Wood

However, there are other kinds of wood as well that can be used for chemical pulp production. The quality features of chemical pulp depend on the wood used. Chemical pulp obtained from hardwood such as eucalyptus consists of shorter fibres – about 1 mm in length. It is primarily suitable for production of bright white graphic paper such as writing and copy paper; it also contributes a remarkable degree of softness to tissue.
Softwoods such as pine and spruce, by contrast, are mainly used in northern Europe and Russia. The chemical pulp produced from softwood gives paper more strength because this pulp has long strong fibres.

The pulp and paper producer SCA is one of Europe’s biggest owners of forestry land. It owns 2.6 million hectares of Swedish forest, an area half as large as the Netherlands, and manages around 2 million hectares for wood use. The remaining area is left untouched. Compared to Brazil’s eucalyptus, the spruce, pine and birch that SCA plants involve entirely different periods: From the seedling to the mature tree takes 100 years! This is why sustainable forestry gets a lot of importance here. Interestingly, SCA annually cultivates 90 million seedlings in its tree nurseries and replaces each felled tree with three new ones. So, the growth of the forest exceeds the felling, which SCA is also planning for the next 20 to 30 years. The Swedish company is proud of its positive CO2 balance, as its forests absorb more carbon dioxide from the air than is emitted by the company’s own forestry, industrial production and transport.

The forests of SCA are certified by FSC and in part by PEFC. It may be mentioned that since the company covers only about 50 per cent of its paper mill needs with the chemical pulp it produces, the other half is purchased. SCA, by following strict guidelines, provides for transparency regarding the origin of these fibres and has obtained the chain-of-custody certification from FSC for it. It may also be mentioned that due to its numerous efforts in the area of environmental protection and ethical action, in 2013, SCA was distinguished for the sixth time in a row as one of the world’s most ethical companies by Ethisphere Institute.

Many are skeptical when virgin fibres are produced from trees and used for paper production. Such people, in effect, disregard the fact that wood is one of the few really renewable resources. By means of efficient and responsible forestry, producers like SCA are even increasing the woodland area and, as a result, providing for a positive effect on climate, soil and CO2 values.

The use of virgin fibres is warranted in regions like Scandinavia. For example, in Sweden, the northern half of the country is densely forested, but sparsely populated. There are high rates of recovered paper collection; however, the amount of recovered paper that is gathered is not enough. So, Swedish paper producers have increasingly relied on virgin fibres and therefore use the raw material directly in front of them, which is produced from the nearby forests managed over the long term.

When we consider the entire paper recycling loop, we find that that pulp is indispensable – not every paper fiber finds its way back into the recycling process. Think of all the books in libraries or homes and other paper products that do not become recovered paper. So, the need for paper cannot be met merely with recovered paper. In addition, global demand for paper is increasing and so also the required amount of the raw material.

In the last decade, the global demand for chemical pulp grew by leaps and bounds. Interestingly, a substantial amount is exported, as regional conditions often do not allow on-site production. The leading information provider for the global forest products industry, RISI, claims that Latin America will take first place in the production of market pulp in 2025 and by then produce 14 million more metric tons than in 2011. This region will thus account for about half of the expected growth worldwide.

China is glad to purchase the product, as the need for chemical pulp in the country is enormous. This need stems from the increasing production in the country of printing and writing paper and tissue – grades for which virgin fibres are used as raw material. According to RISI, by 2025 China will have the largest increase in the need for chemical pulp, namely by 14 million metric tons, which is more than half of the overall global increase in need. China will be unable to meet its demand by itself because the soil composition and climate in China are less suitable for tree plantations. Chinese chemical pulp imports are therefore quite likely to increase in the near future.

In North America and northern Europe, consumption of printing and writing paper is declining, which has an effect on the chemical pulp producers as raw material suppliers. They are also feeling the rising competition from emerging countries. The number of conversion projects is thus increasing in both the regions and the producers are going for other pulp grades. A significant number of machines are being converted to produce fluff pulp and dissolving pulp. These grades have a higher price level; they therefore ensure the competitiveness of the producers.

The development of chemical pulp production remains quite promising worldwide. Growth in the chemical pulp sector is bound to take place. The growing need for paper on emerging markets is contributing to this growth. Also, there is the increasing demand for board that results from global online trade. An overwhelming increase can be noted in this sector especially in Asia and in many other parts of the world. With an annual growth of about 4 per cent, global tissue consumption is also boosting the demand for chemical pulp. 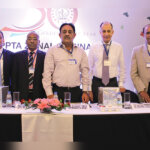