Federation of Paper Trade Association (FPTA) organized its 50th AGM in Bangalore from Sep 17 to 19, 2011 with the theme “Paper- Going Green”. The AGM was attended by over 700 dignitaries from the paper industry across India, including representatives from paper traders, paper mills. Leading paper manufacturers were present during the event such as Ballarpur Paper Industries, The West Coast Paper Mills, ITC, Seshasayee Paper & Boards Ltd, The Andhra Pradesh Paper Mills, The Mysore Paper Mills and many more. The agenda was to explore and discuss various issues related to the paper industry. The dignitaries reviewed the existing status of the industry, discussed future challenges and shared inputs on the emerging business scenario for the next decade.

Mr. Shekhar Chandak, the outgoing president of FPTA said “Paper trade is growing in leaps and bounds with the export and import business also growing at an exponential rate. The growing Indian economy also indicates a further increase in paper trade. The main drivers would be the growing printing and publishing industry, literacy, changing demographics, growing consumerism, mall culture and so on”.

Mr. Tejraj Jain, President of FPTA said: “The theme of this conference “Paper Going Green” was chosen deliberately because the FPTA want to let everyone know that paper is an eco-friendly product. The major manufacturers have their own captive plantations. The saplings grown in 3 to 5 years are used as the raw materials and then re-grown contrary to the views that paper mills destroy forests. The paper industry replenishes more than it takes and ensures the sustainability of our forests by planting more than 1.7 million trees every single day. The Indian paper manufactures are undertaking backward integration through social farm forestry and setting up captive pulping capacities”.

During the program Mr. Yogesh Agarwal, CEO, Ballarpur Industries Ltd. gave a synopsis of the Indian paper industry, “We have reached to a tipping point where the growth of 7 to 9% is substantially good to suggest the structural changes in manufacturing, trading and industry as a whole. Our global footprint is just 2.5% i.e. 10 million tons out of 390 million tons globally while we have 16.5% of the global population. The next decade would mark the growth trajectory for the Indian pulp & paper industry where we will contribute in excess of 10% to the global paper consumption as compared to current share of 2.5% only. It’s natural for the country like India where more than 50% of the population is less than 25 years old, having the per capita consumption of 9 kg against the global average of 58 kg to start contributing in the meaningful way.

Further he added: “Earlier most of the installations taking place were second hand but in the last 5 years or so the industry has gone for new and latest technology justifying the growth of 7 to 9%. In the recent years our customers i.e. printing industry have invested well and have grown more than the CAGR of paper industry. This has given us more headroom to expand. The market is becoming more and more demand driven as the supply constraint is being removed. Nowadays supply being opened up and is creating its own demand”.

“Today one word that defines the Indian pulp & paper industry is the Transition with regard to raw material, technology, capital employed, distribution etc. The another important factor is that India is recognized by the world and is being seen as the potential destination in manufacturing, merchandising etc. so we can see some healthy collaborations in future. Smart companies identify the market dynamics and convert them into opportunities and BILT being committed to the industry has identified the same and has grown organically and through acquisitions”. 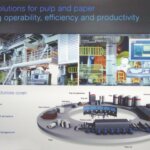 APP: Force to Reckon With…