India has limited domestic forest resources to supply its forest industry, and with growing domestic demand for forest products, the country’s pulp mills and sawmills have found it necessary to increase importation of wood raw-material both in the form of wood chips and logs.

Over the next five years, demand for paper is expected to increase by between 2-12% annually, depending on paper grade. Over the past decade, the domestic pulp industry has steadily increased its usage of pulpwood because of higher pulp production, less usage of bamboo and because several pulp mills switched from recycled fiber to wood fiber, according to Wood Resource Quarterlypublished by Wood Resources International LLC.

The share of imported wood fiber for the pulp industry accounted for almost ten percent of total consumption of wood fiber in 2014, and this share is expected to increase in the coming years.

The shortage and high cost of local pulpwood in India has resulted in increased interest in sourcing wood chips from overseas despite logistical difficulties both at the ports and when transporting the chips from the ports to the pulp mills long.

Importation of chips is fairly new and Indian pulp mills did not import any wood chips until 2013 when the first shipments of hardwood chips from South Africa, Australia and Thailand arrived. The total imports reached just over 200,000 odmt in 2013, then rose to approximately 370,000 odmt in 2014, according to the Wood Resource Quarterly. South Africa has been the major supplier of chips, with shipped volumes accounting for about 70% of the total import volume in 2015.

During the first six months of 2015, India imported an estimated 180,000 m3, or about 30% more than in the same period in 2014. So far in 2015, three countries have exported wood chips to India, South Africa, Brazil and Vietnam. South Africa has been the dominant supplier to date, and is likely to continue to be the major supplier for the foreseeable future. 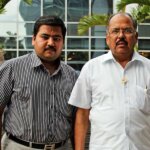 SPBPL: Sure of Packaging Boom