The new subsidiary Paques Environmental Technology India Pvt. Ltd. is the fourth and most modern sales/production site of the Dutch company Paques, a biotechnology specialist in the purification of wastewater and biogas. The facility is expected to reach the full capacity at some point in 2017.

In fact, hon’able ambassador of the Netherlands inaugurated the new office and production location at Sri City from the Dutch Emabassy in New Delhi one day earlier on October 17 by unveiling a plaque, which was mounted in the new office at Sri City the day after.

The new plant (approx. 2500 sqm) is situated in one of India’s modern industrial parks, Sri City in Andhra Pradesh. Most of the machineries for the production of internals for the Paques systems for wastewater and biogas treatment were imported from Europe. Paques intend to supply the products from this centre to customers across South East Asia, Japan, Vietnam, etc.

Mr. A.H.M. Stoelinga, Ambassadorof the Netherlands hailing his country’s long historical, cultural, and commercial ties with India said that the Dutch always felt at home in India owing to a 400 years old trade ties between the two nations. “400 years ago, the Netherland was India’s hub in Europe and now, some centuries later, companies like Unilever, Philips and DSM has settled in India in a way that most of the Indians think that these are Indian companies. And then, from beginning of this century, the trend reversed and big Indian companies started to invest in the Netherlands, viz. Tata, Tata Steel, Tata Consultancy Services, Apollo Tyres, United Phosphorous, Infosys, and WIPRO.

At the moment, India is for Netherlands the fifth largest source of foreign direct investment and also 20 percent of all India’s exports to Europe, which is around 50 billion, enters Europe through the Netherlands.

“At the moment, India is for Netherlands the fifth largest source of foreign direct investment and also 20 percent of all India’s exports to Europe, which is around 50 billion, enters Europe through the Netherlands. So, you can easily say that Indians also felt at home in Netherlands and it has become a hub in Europe for Indian exports and for Indian companies who have the head distribution offices in Europe.”

The ambassador also highlighted the areas where the Dutch companies are active in India, viz. agriculture, life sciences, health, logistics and water. “Paques is operating strongly in the Netherlands in sector of wastewater treatment because the water related expertise was a necessity as 40 percent of our national territory is inundated by seawater. Our soils are soaked with seawater and are very weak and soft. We always have to deal with water-related problems and have to act and plan accordingly. Special planning and entrepreneurship are in the DNA of the Dutch. There is not a square centimeter or a square inch of our national territory that has not been on the drawing table at some or the other point of time,” said the ambassador.

“Paques has the reserve of that Dutch history and tradition of adapting to various water related challenges. Now, in India, we have enormous economic growth along with enormous growth of the population; at the same time, we have water stress. The scarcity of water is for today, and for future, one of the most important challenges because water is the source of life. You need water for the production of food, energy and goods. You need it for the maintenance of the ecosystems and for socio-economic development,” he added.

Elaborating further the significance of water conservation practices, the ambassador said, “We are all aware of the fact that 70 percent of the world consists of water, but only 1 percent of that water can be used for consumption. Now, it is clear that the pressure on already scarce resource of fresh water will be the further intensified because of the economic and population growth.

“In India, we have growing demand for fresh water on one hand and we have very less percentage of waste water being treated on the other. I think Paques came exactly at a good moment because now India has to start cleaning up of the water and purifying wastewater on huge scale. India also needs to start thinking on low quality water for certain purposes of water use. I am happy that I am here in India at the launch of Paques; they work not only for India, but also for the Pacific region.”

Speaking at the occasion, Mr. Stephen Bocken, CEO, Paques Holding bv underlined the emergence of Paques as the world leader in waste water treatment over more than five decades of constant research and innovations. He said, “Starting from early 1960s, Paques has grown into a worldwide leader in waste water treatment. We now have over 2000 references in over 60 countries in this field and Paques has excelled in developing and implementing innovative biological applications for waste water and biogas. And, over the years, Paques consistently has been the first to launch and develop a range of wastewater treatment solutions like anaerobic, desulfurization, and deammonification treatments.”

Our entrance to India is part of a very clear global strategy. We intend to be global yet want to be known regionally as well for our outstanding work.

Mr. Bocken also divulged detailed strategy of Paques in India and how it proposes to offer lasting solutions to the country’s water related woes. “Our entrance to India is part of a very clear global strategy. We intend to be global yet want to be known regionally as well for our outstanding work. Regional roles are very wide and comprehensive which includes functions such as cell engineering, production and resourcing whereas global roles including strategy making, research & development, etc.,” he said.

Speaking on the new facility and a Paques’ resolve to strengthen its engineering facility in times to come, he said, “Now, we may ask ourselves what we have built here. Well, simplistically, we have built a production unit. And, certainly, this is also true that we have done far more than it – we have made a clear statement to the entire Indian subcontinent, be it customers, competitors, or anyone else that we will grow with and we will grow for India. We also at the same time give the commitment to grow the other functions of Paques which is to grow our engineering facilities, engineering capabilities, project management capabilities and our skills.

“Talking about the world-class, I think it is very clear looking at the facilities that we are committed to world-class and nothing else. Given this kind of facility, we are able from this side to export throughout the world, especially to the Asia-Pacific region that is our intent and that is our aim. Now, this is going to need a lot of effort, both from the local and global teams to get courage, strength, ability and willingness to take that extra step when needed in order to grow their capabilities. At the same time, in our global organization, we need to transfer skills and build up the courage locally. This step is far more than just an opening of a production unit; rather it is a big step for entire Paques as an organization.”

Dr. Jos Paques, Founder & Major shareholder of Paques was also present at the occasion and took the audience through an insightful journey into Paques past achievements. Dr. Paques sketched how his company evolved with various water-related challenges is faced and found a solution for. He said, “I would like to look back in history, as far back as 50 years ago; we had faced various environmental problems which were caused by wastewater discharge from different industries. With the legislation imposing norms, everyone thought it would be very expensive when it goes down the mill.

We need to adapt new technologies and work cultures to grow globally. In 2050, we will have 9 billion people and they would want same life like us with trees, good sanitation and that means there will be a tremendous pressure on systems.

“At the same time, these legislations forced companies to start activities on water issues front. Thereafter, we developed many innovative technologies. All those technologies are based on natural processes because we believe world is one big recycling machine, which can recycle everything. However, if we produce too much in one location it would be a problem. We can help nature by developing technologies which create a balance between nature and industries. And, that is what we should do worldwide and we are doing it too.

“We need to adapt new technologies and work cultures to grow globally. In 2050, we will have more than 9 billion people and they would want same life like us with trees, good sanitation and that means there will be a tremendous pressure on systems. With our technologies, we can balance the two things – nature and industries – which is the major mission of our company to provide better future for forthcoming generations. We see a lot of opportunities in India for our company.”

Mr. Ravindra Babu Sannareddy, Founder & MD, Sri City congratulated Paques on opening a world class facility in Sri City. He said, “This is the very first manufacturing unit of Paques in India and I would like to congratulate you all on successful completion of this factory in less than one year. As His Highness, the Ambassador, pointed that the trade between India and Netherlands started almost 400 years back, the relationship between Sri City and the Netherlands started four years back with Hunter Douglas, which became operational last year. It is a huge thing for us that we are inaugurating the second company from Netherlands here in Sri City.

At Sri City, we strive to provide world-class infrastructure for industries because we want to be the green city and a smart city at the same time.

“When I saw a company that deal in environmental practices, energy reduction and wastewater treatment, I thought these are the type of companies that we want in Sri City. At Sri City, we strive to provide world-class infrastructure for industries because we want to be the green city and a smart city at the same time. We can be a green city by inviting green initiatives like Paques, or the companies that produce products which may reduce pollution. Also, I hope this project will bring more companies from Netherlands and other Europe-based companies to invest in Sri City. 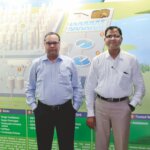 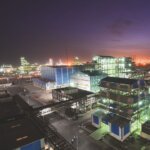