Interaction started and the first question asked to Brigadier SK Mutreja, CMD, Nepa Ltd. was what are the new developments at Nepa Ltd.? He replied the GOI has approved the revival package for progressing of the mill to next level. With the rising interest to know that what this revival package contains and how Nepa got its new avatar from being considered to be on the verge of closure and most importantly how come this all happened. Having these thoughts in the mind team Paper Mart went into the flash back with Brigadier Mutreja…

The mill was setup in early 50’s to produce newsprint. The machines were brought in from USA, Finland, Germany, UK etc. The commercial operation began here in 1956 with the press of a button by then Prime Minister Pt. Jawaharlal Nehru. Having around 4 decades of smooth wind the turbulence finally began. With the uprising of the economic liberalization, domestic market was flooded by international newsprint. Competition increased and the survival became tough for Nepa Ltd. and company started accumulating losses. In May 1998 the company was referred to the BIFR and was declared sick. Besides, the GOI decided to divest the company as paper was not the focus sector for them.

In the summers of 2005 (June-July), Brigadier Mutreja was appointed to take charge of the mill but before joining the job he made a quick visit to this place. Further he said “at first it looked to me like an inert place and on my way to factory the road stretch was very bad having no signage or any person to navigate you. When I visited the factory and started to take a round with one of the temporary employee of the mill who accompanied me, I saw one idle paper machine shutdown from the last 5 years and when I asked him why is it so, he said, (choriye na saab) let it be then, I asked that does this other paper machine works he said, (ha saab mahina mai 10 din chal jata hai), it works for about 10 days in a month, if the raw material is available. On my way back I asked the employee accompanying me that what he thinks about the potential of the company, he said; (agar maalik yaha baithega to chal jayega) if someone takes charge it might work. So, I thought that there is a chance to do something for the town, so why not give it a try.” The hour of crisis became hour of opportunity for Brigadier Mutreja.

The ministry intention was to sell it off, but Brigadier Mutreja decided to improve the mill and the surroundings so that the mill gets a better price. On the first day people came and introductions were made. The union asked for the money to celebrate Diwali but due to the financial crisis company managed to pay bare amount.

Next day on his visit Brigadier Mutreja discussed the inadequacy in the mill such as insufficient raw material, technical inefficiencies, manpower problem, marketing issues etc. The major challenge in addressing these issues was to arrange the working capital which was in deficit of Rs. 20 crores approx and company owed another five and a half crores to suppliers. Brigadier Mutreja having his specialization in disaster management went to the buyers and requested them for advance and in lieu of that a special discount was offered to them. In that way he raised Rs. 1 crore. Calculations were made that if both the machines are in running state then the money earned will be more as compared to what they were earning by running single machine. Suppliers were called and deliberations were made that those who resume the supplies would get 10% over for their previous outstanding, above the cost of supplies every week. Many were reluctant to start but some came forward to try out. Thus the money raised was used to pay the suppliers and towards salary of workers. Hence, second machine was then started in just 2 weeks time.

Another opportunity to raise money was seized and that was to auction the scrap, which was at the factory and its surroundings. Scrap collection team was made and in span of one year the company raised approx Rs. 7.5 crores and in January 2007 it paid full salary to the employees. Lot of emphasis was laid on keeping the premises clean. The things got into momentum, people saw that money was coming in and they felt that something will happen and they reacted positively to it. Rs. 48 lacs were saved in a year by maintaining the discipline in the area of power usage. Similar discipline and efficiency was brought in across the mill and town.

During his tenure of 3 years (2005-08) some best practices were introduced such as
• Regular meetings were made with the HOD’s of the respective departments to discuss the current workings, the goals to be achieved and the shortcomings they faced.

• Once a quarter all the workers were addressed by the CMD about the company’s current performance, financial highlights and plans ahead.

• An NIIT training center was opened to give the subsidized computer training to the employees.

• Two-way communication was initiated suggestions and feedbacks were welcomed which acted as a great help.

• All the old vehicles & inefficient were sold off with the permission of the board.

• A music system was installed in the departments wherein religious songs were played in the morning and light music throughout the day, which increased the efficiency of the workers.

• In the first of a kind activity of bringing the 1600 tons of waste paper in the mill through train, the confidence of the employees was so high that the contract of unloading the train was not outsourced rather was executed by the union and employees themselves.

“My tenure was completed in 2008, and at that time we were making cash profits and all the outstanding dues were cleared. The production of paper from 21,000 tons had been raised to 52,000 tons presently. The thing that kept me going was that I came here with the mission to improve the quality of life of the people and what I inherited in Oct 2005, I had left by making an improvement in the quality of life rather than keeping it same. Today, the company has conked off all the benchmark related to production, capacity utilization and overall development” he said with the proud smile.

At this point the flashback got over and discussion moved on to his reappointment in 2010 with an additional charge and when he joined he got a heroic welcome by the people of Nepanagar as visible in the photo.

Presenting the current situation he said,“the disinvestment took time, and in the meantime the 3P approach (people, process, profit) adopted, shaped up the company and the town. This turnaround resulted into the approval of revival package. It will be broadly used for 3 major activities apart from financial restructuring that GOI has approved i.e. the old dues to be written off by converting the principal into equity and interest being wiped off. The total budget allotted from GOI and bank borrowing is approximately Rs. 300 crores. The plan includes, first to install a new deinking plant of 300 tons per day, secondly to install an additional 8 MW power house and third to rebuild 2 paper machines. We also intend to make writing & printing paper after this. Either we dedicate one machine to W&P or we create a swing facility to switch to any of the grades (newsprint or W&P) as per our need. By increasing the speed of the machines we will touch the production to 83,000 tons putting together both the machines. Renovation and repair of water treatment plant is also into consideration.”

The entire project has to be completed in 2 years time. We will go for brand new equipments with latest technology and intend to go for totally new automated finishing line and create new finishing house for W&P paper. The immediate target is to reach 83,000 tons out of which 46,000 tons will be W&P and balance is newsprint. This expansion will prove beneficial in two ways to Nepa, first our cost of production will come down, then our realization will go up which will improve bottom line and top line both.

Simultaneously, our strategy includes the leaning of the manpower from 1180 to 800 through VRS scheme. We have plans to recruit 60-70 new qualified personnel for the new project. Moreover, the consideration is to take over ITI in Nepanagar and start our own training program in collaboration with GoMP. As on date we are using 98% indigenous and 2% imported waste paper and going ahead we have plans to make it 70:30. Further our offices located at Bhopal, Mumbai, Delhi will easily take care of the sales of the expanded capacity including W&P. With the upbeat confidence, commitment and faith the people of Nepanagar have engrossed their 2nd & 3rd generation into the mill. At last, Brigadier Mutreja concluded with a whisker smile expressing his gratitude towards GOI and GoMP. 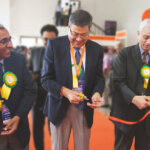 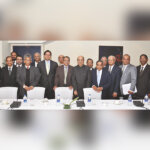